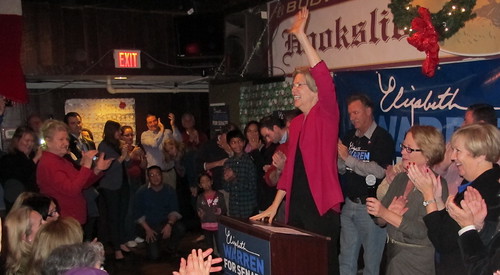 Senator-elect Elizabeth Warren visited Hookslide Kelly’s in Lowell last night to thank the supporters who helped propel her to an eight point victory statewide (54% to 46%) and an even bigger win in Lowell (59% to 41%). Lynne at Left in Lowell recorded Warren’s remarks and has the video available here. Besides expressing her gratitude to everyone, Warren spoke substantively on the need for filibuster reform, observing that since the Democrats took control of the Senate in 2006, Republicans have used the filibuster more than 320 times to delay votes while during the entire Eisenhower administration, the filibuster was used only once. (The proposed reform would not eliminate the filibuster; it would only require Senators seeking to use it to actually speak continuously on the floor of the Senate which is how most of us thought the filibuster was supposed to work in the first place). The window to change the filibuster rule is a small one: only on the first vote of a new Senate term can the rules be changed by majority vote. (Warren’s position on this issue and on several others are laid out in a story in today’s Globe).

When Warren finished speaking from the podium, she set up at the side of the stage and allowed a reception line to form. Everyone who wanted to was able to shake her hand, pose for a picture, and offer her words of encouragement or advice. She was in no hurry to leave.

Before Elizabeth Warren took to the podium, she mentioned to a view well-wishers that Lowell will always be a special place for her. It was here that she received her first official endorsement in this race (from Congresswoman Niki Tsongas) and it was here that one of the most memorable (for her) events of the campaign took place – the big, boisterous pre-election rally at Arthur Ramalho’s West End Gym. With those connections, and with the deep Lowell roots of her State Director, Roger Lau, our new Senator will be no stranger to this city.

One Response to Elizabeth Warren in Lowell