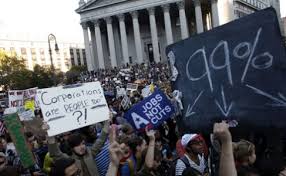 The biggest surprise to me this fall is the absence of massive youth demonstrations in favor of President Obama or at least in opposition to the trickle-down, “voodoo” economics that is still the favorite approach of the national Republican leaders. I thought for sure after last fall and winter that the Occupy ground forces would be marching in the streets during election season, demanding policies of economic fairness from the federal government. On Facebook, I see reports of Occupy activity here and there around the country, but nothing like the drama we saw a year ago. Although these two are not apples-to-apples in comparison, for its part the Tea Party seems to have been absorbed full-form into the Republican Party. Whatever bipartisan critique of corporate welfare and profligate public spending that was there in the Tea Party’s list of grievances appears to have collapsed under the weight of anti-Obama sentiment.

I heard an Occupy movement founder interviewed on NPR recently—he said he was proud that those involved had rejected the option of seeking change through electoral politics. He’s naive. That only opens the door to people in positions of power who will do things to you instead of for you. There was a moment when Occupy looked like it was going to be the next political prairie fire, starting from the big cities and flaring outward. The Tea Party, on the other hand, stomped and stumped its way to a take-over of the US House of Representatives in 2010, a victory that may give the Republicans a president next month. The anti-government extremists in the House didn’t get one of their own for the party’s nominee, but they got Gov. Romney to take their side and prove it by bringing on board Rep. Ryan. And the House tied down President Obama effectively for the past two years. I think history will show that they traded economic pain for the possibility of defeating him in 2012.

I saw a headline on the web about NBC News’s Chuck Todd warning about the enthusiasm gap among voters who tend to favor Democrats. Did everything change in a week? Obama was sailing until he crashed on the rocks of the debate? Hard to figure. Where did everyone on his side go? If there is a lack of excitement and urgency, then anybody who has not spoken up, sent a check, put on a bumper sticker, volunteered to make phone calls or hold signs, marched in the street, written a letter to their local paper, posted on blogs or Facebook, registered to vote or checked his or her status with the local election office—well, anybody who hasn’t done anything should be ready to accept the results without complaint on November 6. The choice between Obama and Romney is a stark one.

And it’s not just the top spot that matters in the election—the down ballot races will affect day to day life in the state and city more than the outcome of the White House contest.

One Response to Occupy and the Tea Party