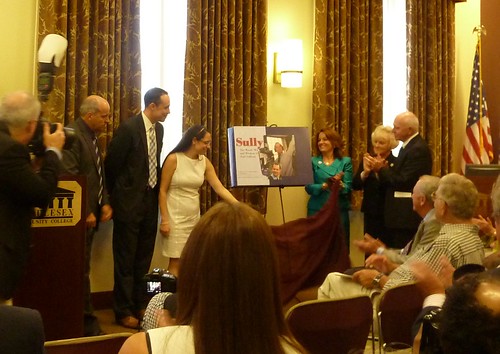 While members of the Boston media were much in evidence today at Middlesex Community College’s Federal Building for the book release celebration of “Sully: The Words, Wit and Wisdom of Paul Sullivan”, it was more like a reunion of the world of Lowell politics, circa 1992 with elected officials, members of the media and those from the business world all in attendance. “Sully” is a collection of dozens of the 1700 or so columns the late Paul Sullivan 1957-2007) wrote for the Lowell Sun beginning in 1991. The events featured remarks from MCC President Carole Cowan, Kendall Wallace of the Lowell Sun, Paul’s daughter Kerri, book editor Pat Cook, and Mary-Jo Griffin, Paul’s wife and Director of the Paul Sullivan Leadership Institute at Middlesex Community College. (All named here appear in the above unveiling photograph along with Paul’s son, Ryan).

The book is on sale online. Proceeds go to support the Leadership Institute that bears Paul’s name. A quick scan through the book reveals a wonderful mix of Lowell, state and national politics; many about various charitable causes; and many of Paul’s observations on family and life.

2 Responses to “Sully: The Words, Wit and Wisdom of Paul Sullivan”