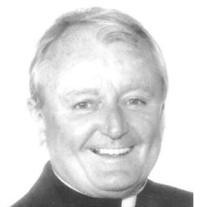 Fr. Ray Kehew, who was my dad’s roommate at Providence College from 1951 to 1955 and who taught philosophy at PC when I was a student there in the late 1970s, passed away this week in Portsmouth, Rhode Island. My mom and dad kept in touch with him through the years which strengthened the friendship that was formed long ago. Ray was a wonderful human being, always cheerful and ready with a kind word. His primary duties were as a parish priest and pastor, so I was always envious of members of the parishes he served. He was also a great teacher and a wonderful presence on campus. He and I shared a rather obscure connection: we were both commissioned as lieutenants in the US Army through the ROTC program at Providence, and were both assigned for a time to the same small base in the same small town, Ludwigsburg, in West Germany, he in the 1950s, me in the 1980s.

Because so many people from Greater Lowell have ties to Providence College, I thought it appropriate to share this news with our readership. Here’s Fr Ray’s full obituary:

He was a graduate of DeLaSalle Academy in 1951 and Providence College in 1955. From 1955 to 1957, he served as a lieutenant in the U.S. Army, based in Ludwigsburg, Germany. After his discharge, he entered the seminary. Fr. Kehew was ordained to the priesthood in 1963 at the American College in Louvain, Belgium. He then served for two years as Assistant Pastor at St. Joseph Parish, Central Falls.

In 1965, Fr. Kehew returned to Europe for graduate studies, receiving his Doctorate in Philosophy from the University of Louvain, Belgium in 1969. He then served as Catholic Chaplain at Brown University for six years followed by six years as Pastor of the Genesis Community, Providence. He then was a member of the Team Ministry at Sacred Heart Parish, East Providence for six years and Assistant Pastor at St. Mary Parish, Warren for one year. In 1988, he was assigned to St. Andrew Parish, Block Island where he served as Pastor until his retirement in 2004.

Fr. Kehew was a very popular faculty member of the Department of Philosophy at Providence College, serving for twenty-eight years and retiring in 2004.

Fr. Kehew was predeceased by his sisters, Margaret (Raymond) Munz of Hauppauge, NY and Sheila (Frank) Fitzgerald of Taunton, MA. He is survived by his sister, Patricia (Blaine) O’Connell of Tiverton, seven nieces and nephews and several grandnieces and grandnephews, all of whom were very special to him.