This afternoon at 1 pm and tomorrow at 10 am, I will be leading tours of historic Lowell Cemetery. The tour is free, no need to register, just show up at the Knapp Avenue entrance to the cemetery and be prepared to walk for 90 minutes. The tours will be repeated next Friday (Sept 28) at 1 pm and Saturday (Sept 29) at 10 am.

During the tour, we walk from grave to grave of important and interesting personalities from Lowell’s past. Here’s a sample: 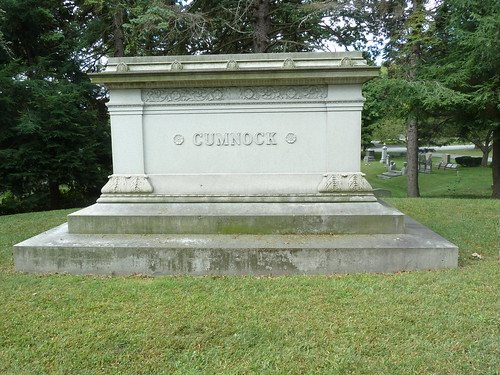 Alexander G. Cumnock was born in Scotland in 1834 and came to Lowell with his family in 1846. In his youth he went to school during the day but his thirst for knowledge caused him to study other subjects, more technical in nature, on his own at night. He went into the textile mills as a manager and by 1868 became the agent of the Boott Mills, a position he held for 30 years. In 1898, he was appointed head of the Appleton Mills. Many of Lowell’s mills up to and through the Civil War, produced a rough quality of cloth. The post-war spread of textile manufacturing to the south where everything was cheaper posed a dire threat to the business model of the Lowell mills. Cumnock led the movement in Lowell to convert the production at the city’s mills to a higher quality cloth of a finer weave that could not yet be produced in the south due to a lack of expertise. As history records, however, Cumnock’s plan only delayed the inevitable demise of the Lowell mills.

In the early days of the Lowell mills, the founders from Boston appointed local managers, called “agents”, to run things locally. Because much of the work at that time involved the steady growth of the mills and the corresponding rise in population, most of the problems were of a social-welfare nature and so most of the agents were generalists, many being lawyers, who lacked any technical background in textile production. After the Civil War when it became tougher to make money, the mills shifted management to specialists like Cumnock.

Cumnock attributed much of his success to the additional study he did at night while growing up. This motivated him to help found the Lowell Textile School. Through classes offered in the evening after work, the objective of the school was to impart “practical knowledge necessary in cotton, wool, worsted, silk and other textile industries.” The school opened in 1897 on Middle Street with 69 students. By 1919 it enrolled 1200 students and had moved across the river from Moody Street to what became known as Textile Avenue. Along with the State Normal School (later, State Teachers College), it formed one of the parent institutions of today’s University of Massachusetts Lowell. A major building on the university’s north campus is named in honor of Alexander Cumnock.