Here’s the latest from the road from Tom Sexton, sent late Tuesday. He is in New England as you read this. I expect the next report will be from Eastport, Maine.– PM

This might be the last entry since we’re almost to Vermont. It seems that everyone in Ontario lives on a lake. Our first stop is at Spruce Lake in Kenora. Most of Kenora is on The Lake of The Woods, which is a large lake with many bays and inlets. Like many Ontario towns, it has always depended on what we call today “the forest industries.” We’ve stayed here several times, but this time we had an unfortunate incident. Another guest from Missouri who had been fishing in Alaska several times told us about the time a drunk “Indian” picked him up at his hotel in Anchorage and took him fishing for salmon in a river not far from town. When he had caught his limit, the man’s wife appeared and demanded his fish because she was an “Indian,” and all the fish in the river belonged to her and the other “Indians.” He had to drive back to town because his guide was too drunk and fighting with another “Indian” in the back seat. No one who knows anything about Alaska calls the Native peoples “Indians.” I kept silent and it still bothers me. I should have asked him if he had met any of the Natives who winter in Hawaii and live in some of the finest houses above Anchorage.

The next morning, the low tire pressure symbol was on in the Passat, but our luck held and we found a tire store where they removed a screw from our almost new tire. I suspect it was placed there by a Missourian high on something. You know what they’re like. Believe it or not, the tire was fixed by a man who was born and raised in Fairbanks. He grew up two blocks from where we once lived. He moved to Kenora because his wife was homesick. We’ve never been so happy to pay almost fifty dollars to have a tire fixed. It was our first flat in ten cross- country trips. 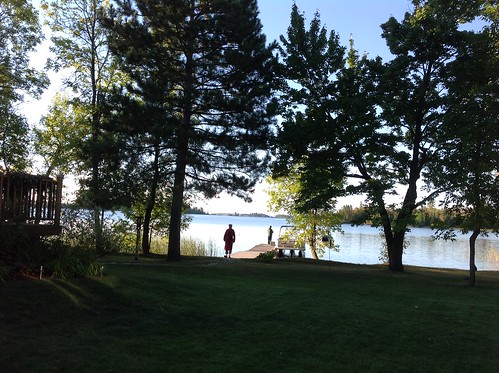 I’ve attached, I hope, a picture of our next bed and breakfast in Fort Frances, Ontario. The man in the bathrobe (above) is the owner. The man fishing from the dock is his friend from Minnesota. The night before the owner’s Canadian wife and the couple from Minnesota where wearing Green Bay Packers sweatshirts while they watched the Packers beat the Bears. The owner is a Bear’s fan. Fort Frances and International Falls, Minnesota, are really one city separated and connected by a bridge. Our continental breakfast was one bagel between us and coffee. Sharyn just told me to tell the truth. It was two bagels and four slices of bread, cost one hundred and ten dollars.

After Fort Frances we stop at Thunder Bay on Lake Superior and one of our favorite places. Poutine anyone? 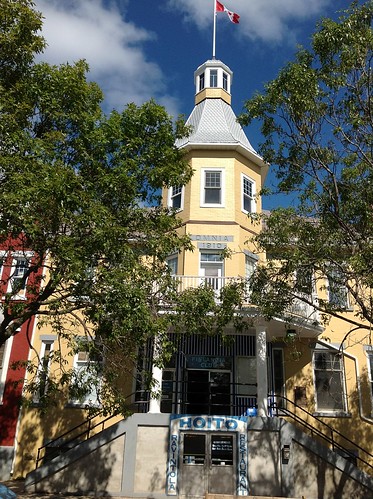