Like Charles Dickens of ye olde England, Tom Sexton of old Lowell has a serial tale going here about his travels with his wife, Sharyn, and loyal pup in a valiant Passat making its way “from the west unto the east.”—PM 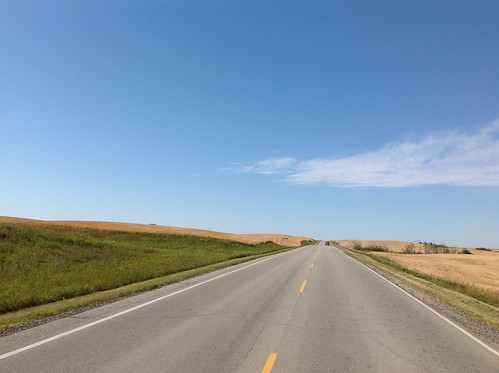 “Little Passat on the Prairies” by Tom Sexton

We’ve lived surrounded by mountains, the Chugach just east of Anchorage and the Alaska Range to the north, for more than 40 years, but there’s something about the endless vista of the prairies that appeals to me. I would love to live here; and if I win the Canadian lottery, who knows?  I’m sure you’ve heard the joke that goes something like, “You can see your dog running away from you for a week in Manitoba.” You can also see your imagination following it. What were the town fathers who built the replica of a Viking ship at the edge of Erickson, a small town near Riding National Park, thinking? I can’t remember his name right now, but an Englishman who called himself Grey Owl lived as a Native American for many years in the Park at the beginning of the last century. Most people thought he was Native American. We’ve been away from a decent internet connection for three days, so my facts might be a little left of center on this as they are on many other things. Riding Mountain is worth a visit, and you can also visit Grey Owl’s cabin. We’ve never seen a wolf, but they’re in the Park. 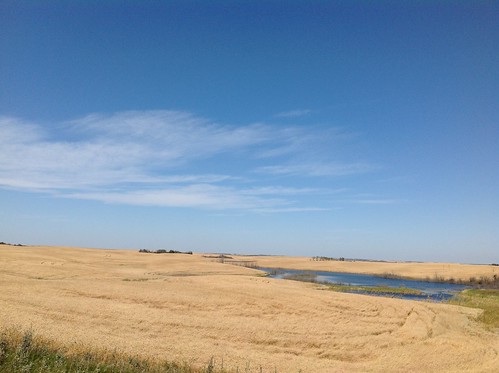 After Riding Mountain, we head for Winnipeg, where the Yellowhead Highway ends. We pick it up in Edmonton, Alberta; however, it begins in Prince Rupert on the coast. If you decide to drive across Canada, take the Yellowhead. Winnipeg, Saskatoon, and Edmonton are the only large cities on the highway, and you can go around them. We do.

I mentioned towns that have statues that stand for what lends the town distinction. In Gladstone, Manitoba, you will pass the Happy Rock. For years I couldn’t figure it out until I realized it was named for the 19th century British Prime Minister. Notice the straight-out flags. The wind was blowing so hard across most of the prairies we could barely open the car door. Maisey refused to walk.  Every time I mentioned the wind to someone, they looked at me as if to say “What wind?” 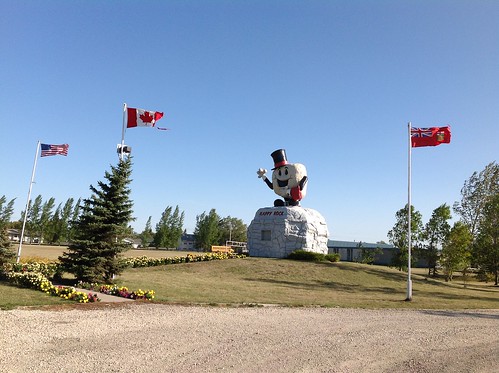 Out here pickerel are walleye, and sometimes walleye are called pickerel, and neither is the chain pickerel that I caught in the Concord River in Lowell when I was a kid. In Ontario they have supper not dinner. As you can see I’m running out of interesting things to report; however, I just remembered our night in Humboldt, a small town in Saskatchewan with a new hotel and another going up. When I showed up for our free continental breakfast an hour early I discovered the reason. The potash mines in the area are booming. At least half of the miners eating an early breakfast were women who drove away in Ford 350 trucks. It was quite an impressive sight.

On to Ontario and the Wawa goose.

5 Responses to ‘Little Passat on the Prairies’ by Tom Sexton