Following is the third bulletin from the road from Tom Sexton, our far-flung correspondent who is making his way eastward with his wife, Sharyn, and their trusty dog.—PM

The usual route from Dawson Creek, B.C., east is through Grand Prairie, Alberta, to Edmonton, and then south to the states. We stay in Canada until Ottawa. Driving east from Dawson Creek, we pass by a series of small farming communities with French names and the occasional oil well. Most of the people who settled these towns came from Manitoba, and their parents and grandparents were from Quebec. The French don’t get as much credit as they should for the settlement of Western Canada. This fascinates me because I have a De Nault or Denault in my family tree.

In one town, Girouxville, a young woman told me her grandfather was an orphan from France and her mother was from Manitoba. Every name on the town’s WWI monument is French. This is the only place that I’ve ever seen the Stations of the Cross in a field beside a church. I’ve tried to attach a couple of photographs of Girouxville taken with Sharyn’s iPad. 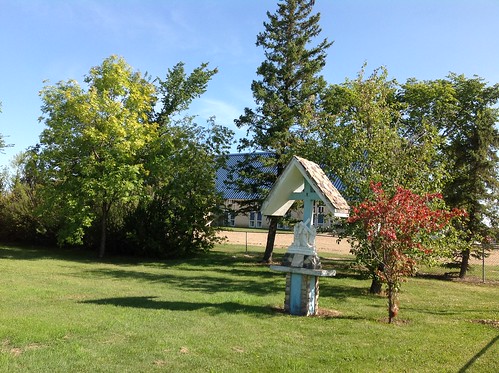 Stations of the Cross, Girouxville

Canadians love to erect the tallest “this and that” to give tourists a reason to stop. The largest statue of a honey bee is in Falher, which is not far from Girouxville. My favorite statue is the one of the “largest sausage in the world” in Mundare, Alberta, about 30 miles east of Edmonton. Actually, my favorite is the Happy Rock in Gladstone, Manitoba. Mundare has a sausage plant and a monastery and great borscht. I forgot to mention the largest wooden Ukrainian Easter egg known to exist is in Vegreville 30 miles away. We missed the exit this trip. We are now in Ukrainian Canada. It was 86 degrees, and we were  miserable. Our Airedale, Maisey, sat down in front of the Ukrainian pioneer mural and refused to move for at least 20 minutes.

On our past trips, the roads were full of First Nations people hitchhiking. Not this time. If you have the time look up Metis, do. Fascinating and very sad. There is a small town not far from Alberta’s border with Manitoba called Innisfree. Every time I passed by, I wondered why anyone would name a town after a lake in Ireland that Yeats made famous in a poem. It  turns out that the president of the Bank of Canada had a summer home in Ireland near the lake, and another lake near what was then called DelNorte reminded him of his home in Ireland so he proposed that if the town changed its name to Innisfree he would build a bank. They did. I think this was in 1916. His bank is gone. The population is about 200 now, but the name remains. See what an English degree can do to enrich your life and travels?