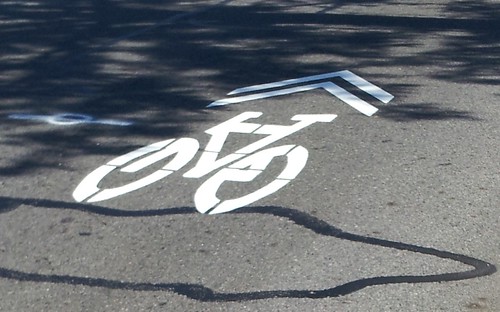 Driving through the city you can’t help but notice the proliferation of new pavement markings like the one shown above that suddenly appeared in the middle of many streets. An explanation was offered in this week’s City Council packet:

Many people have noticed the new pavement markings on streets in Lowell. These are shared lane markings known as “sharrows”, which are part of Lowell’s efforts to improve its infrastructure for cyclists as many cities across the region or even internationally are doing. These markings designate primary bicycle routes in the City, where roadways are too narrow to establish separate bicycle lanes. They are designed to help alert drivers to the likely presence of bicycles on the road and help inform bicyclists how to use shared roadways while increasing safety for both. Clearly, this marking is new to many people and will require education. There will be signs posted along roadways reading the “bikes may use full lane” as bicycles are considered vehicles and subject to the same traffic laws and regulations of the Commonwealth with some minor exceptions or if specifically posted otherwise.

Having had frequent occasion over the past five years to drive up and down Mass Ave in Cambridge, I’ve observed the bicycling culture that exists there. The road has clearly marked bike lanes wedged between the motor vehicle travel lane and curbside parking spaces. The bike lane is used twelve months per year and 24 hours per day by many riders. Drivers of both cars and bicycles seem to peacefully co-exist with both seeming to obey the rules of the road. I think a big part of that comes with a relatively high volume of bike riders. Familiarity does not breed contempt; it promotes awareness and understanding. Plus, the bike riders do their part by obeying the rules of the road as the law requires them to do. These new markers are definitely a step in the right direction for Lowell, a community in real need of alternative transportation options, but we still have a long way to go.

One Response to New pavement markings in Lowell