A new friend of mine from England said that Lowell is missing the boat by not telling the story of its modern physical reconstruction and architectural preservation at street level where people can take it in, appreciate it, and maybe learn from it. On a recent visit to Manchester, N.H., I noticed that there are many well-designed, tasteful metal plaques affixed to buildings that include the year of renovation and names of persons involved, from architects to owners to funders. Given that Lowell is a world-class example of historic preservation and urban revitalization, we may want to think about introducing a similar system that documents the work done and credits those involved.

That would be a good thing to do, but this post is about something else. Having experienced another peak artistic performance at Boarding House Park last night with K. D. Lang and her musical partners taking the audience into joyful orbit, it occurs to me that there ought to be a way to “bottle” some of that emotional ecstasy for the good of the city. It could be something as simple as a walk-of-fame in the bricks along the Mogan Cultural Center with names of the extraordinary performers who have played the green pavilion. I’m convinced that documenting this kind of excellence can move people as they recollect the original experience they had in that place or enrich those who were not there but who can imagine the goodness and beauty that the experience generated. On the John Street sidewalk along the park, close inspection reveals intermittent bronze bricks with names of mill workers and others who lived at one time in the Boott Mills boarding house that is the Mogan Center. It is a subtle commemoration of their time in the city—working people who are typically the unknown agents of change over time in a place. 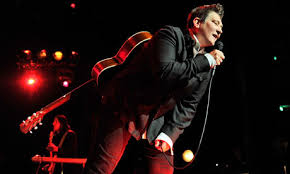 It seems to me that there would be some value in Lowell recording its creative history in public at venues that have been platforms for inspiring experiences. I mentioned this idea to Tom McKay one time in connection with Lowell Memorial Auditorium. The talent that public building has embraced is noteworthy, and I think letting people know about it is a valuable thing to do. This is also a way of recording the community story. There could be banners flanking the stage or a ring of names somewhere in the Auditorium. We have Civil War martyrs listed in Pollard Memorial Library and veterans remembered at “hero squares” at street intersections—which is admirable and meaningful. Why not be more expressive about the artistic narrative in the community? Let people know that Bruce Springsteen, Bette Davis, Louis Armstrong, and dancers from the Royal University of Fine Arts in Phnom Penh like Hun Pen and Proeung Chhieng played Lowell Memorial Auditorium. Announce that K. D. Lang, Joan Baez, Ziggy Marley, and Lyle Lovett lifted up audiences at Boarding House Park. Tell folks that Maya Angelou and Allen Ginsberg read their writings to audiences in Smith Baker Center, and that Edgar Allan Poe spoke in the city. Who remembers that Isaac Stern performed at UMass Lowell’s Durgin Hall? We know Billy Joel was on campus last year, as was U.S. Poet Laureate Kay Ryan, and that Stephen King is coming to the Tsongas Center at UMass Lowell in December. Filmmaker Ken Burns and radio artist Garrison Keillor at the Auditorium. Bob Dylan at Costello Gymnasium in Pawtucketville. Alison Krauss in St. Anne’s church yard, I think it was. Photographer Dith Pran at Market Mills Courtyard. Drake at the Tsongas. Elinor Lipman at the Pollard Memorial Library.

As much as anything else, Lowell now presents itself as a cultural hub. Why not be more self-conscious? Why not make more of the cultural record here—for the benefit of young and old walking around every day, as well as for visitors. The city is host to countless events, performances, presentations, all of which pass into time when the lights go back up and the exit doors swing open. These transient experiences could be inventively squeezed to extract enduring value that will make the community all that more inspiring.