I am a bit ashamed to say that until this week I had never paddled a canoe on the Concord River. Countless times I had driven past the canoe rental place on Main Street in Concord, Mass., the South Bridge Boat House. The weather was good this past Wednesday, so Rosemary said, Let’s go. 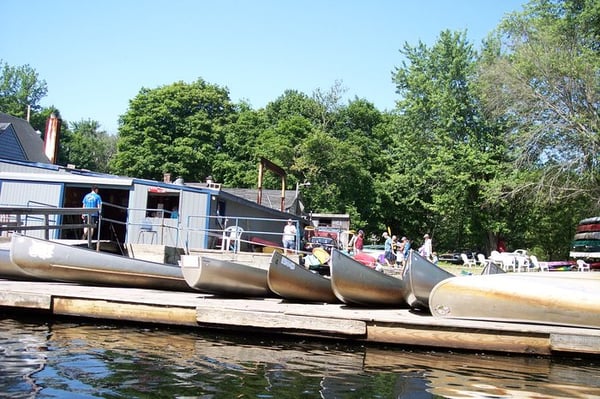 The process could not be easier. Park your car on the side of the road in a small lot, cross the street to the boat house, pay $20 for an hour on the water, choose a paddle and a life jacket, and follow the attendant to the row of canoes for the one that will be yours. I had not been in a canoe for years; among my various canoe adventures is a capsizing at Lakeview, Lake Mascuppic, when a friend and I got flipped by the wake of a power boat that zoomed too close. Another friendly captain fished us out of the drink. This was a no-wave day, however, as the placid Concord flowed through the green backlands of town. Our destination was the famous Old North Bridge at Minute Man National Park, Emerson’s “rude bridge that arched the flood” where “the shot heard round the world’ was fired.

Herons stood in the shallows, a band of about 60 Canada geese occupied one bend, other birds called here and there, and the river flowed by like time coming off a clock. On the way to the bridge we had the current in our favor, and it was strong enough to notice. Recent rain had topped off the channel. The bankside growth was lush with plants, bushes, and trees so familiar to us in central New England that we hardly notice the individual species. To a car driver, the vegetation can become a dense green sidewall. Slowed down in a canoe, you become more aware of the difference between looking and seeing. When you have to swing out into the middle of the river to avoid tree limbs dipping into the water, you notice more. The water was dark, and I didn’t have a good sense of how deep it was. On the route out and back we passed many kayakers and a few canoe duos, but mostly kayaks. The etiquette seems to call for “hi” when passing another traveler. The paddlers were young to old. On shore were a number of hikers and dog walkers. Most of this stretch of the river takes in back yards of suburban homes, but there are areas where the fields and woods come right down to the water.

I thought about the Thoreau brothers on their boat trip up the Concord and Merrimack. I thought of Emerson roaming the banks and the colonial farmers lined up against the British regulars. We saw a National Park ranger near the Old North Bridge orienting visitors to the grounds. The Minute Man statue of Daniel Chester French kept watch near the bridge. On the way back a squad of geese flew past us about eight feet off the water, flying under the radar no doubt, going someplace they just had to be. When we got there, not much seemed to be happening, but they were there patrolling.

File this under the category “Local Things To Do,” and give it a try if you have not been down that way. There’s talk about trying to do more with the waterways in Lowell and getting people onto the rivers and canals more easily. The audience for these experiences is out there. I would do this again, maybe when the leaves turn red and yellow.

4 Responses to Canoeing on the Concord