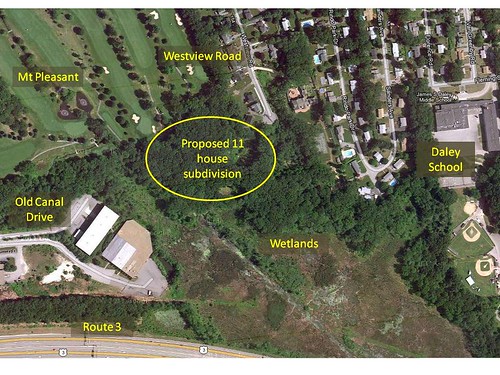 Tonight I attended an informational meeting hosted by David Daly of Daly General Contracting for the benefit of the residents of Westview Road (which runs off of Pine Street and along the first fairway of Mount Pleasant Golf Course). Mr. Daly proposes building 11 new houses at the end of the road. A somewhat similar project was attempted seven years ago by another developer but that proposal was rejected by the city’s planning board (which decision was upheld by the Massachusetts Land Court after that developer appealed).

The above sketch is something I put together after the meeting tonight to help explain this new proposal. One reason why it has been difficult for developers to build homes on this parcel is that it is zoned industrial as part of a larger industrial area that runs along Old Canal Drive which comes off of Stedman Street near the Lowell-Chelmsford line. The parcel proposed for development is currently owned by a single entity, but it is zoned part industrial and part residential. Almost all of the residential portion is wetlands, however, so the buildable portion is in the industrial zone.

The 2005 developer put forward a “planned residential development”, a type of cluster-zoning permitted by the city’s zoning code. It allowed good-sized houses to be built on relatively small lots (5000 sq ft) in return for the dedication of a large area to commonly owned open space. With a planned residential development, the power to override the existing zoning lay with the planning board and not with the city council as is usually the case. Back then, in the face of extensive and sustained neighborhood opposition to the project, the planning board defeated the proposal for a number of reasons.

In contrast, the 2012 proposal seeks a straightforward change of the zoning from industrial to residential. As I understand it, such a proposal goes first to the city council which would then forward it to the planning board for its recommendation, however, the proposal would go back to the city council for a final determination after a public hearing. While it’s obvious that an extensive amount of work has already been done on this proposal (Mr. Daly displayed a proposed subdivision plan and distributed copies of an already-completed traffic study), it doesn’t appear that anything formal has been scheduled before the city council.

About 25 neighbors showed up for tonight’s gathering. There was no formal presentation, but everyone was able to view the plans and take copies of the traffic study and everyone was able to question Mr. Daly and his attorney, Greg Curtis, about the project. A similar meeting is also scheduled for this Saturday at Mr. Daly’s Stedman Street office for anyone who was unable to attend tonight. What comes after that, I don’t know.

I didn’t start this blog until March 2007 so it was not available to me back during the 2005 development proposal. Even if it had been, I’m not sure I would have written about that proposal. This time I feel a bit different. I think reporting on events in this development might provide a good “case study” for those interested in the process. I’m sure I’ll have a position on the development and being human it will be impossible to keep that position completely separate from my writing, but I’ll try to be as objective as I can in just sticking with the facts.