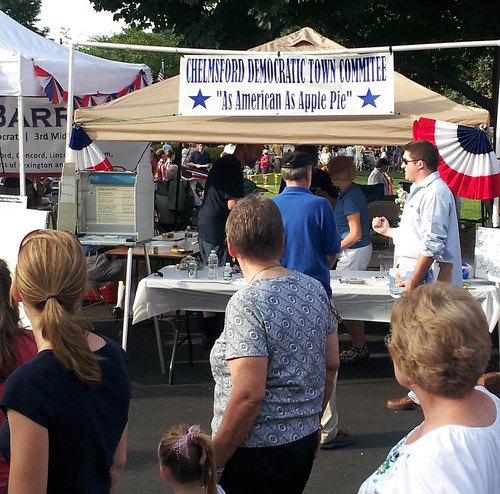 The weather last night was perfect for Chelmsford’s pre-4th of July Country Fair. At least one hundred organizations it seemed staffed booths erected around the perimeter of the town common to promote their organizations and raise funds. With music from the band concert softly emanating from the center of the common, the sights, sounds and smells that messaged the senses of you walked amongst the booths were amazing. If you wanted to bump into someone from Chelmsford, last night on the common was the place to be.

If the 4th of July is about anything, it’s politics, so I gravitated to the Chelmsford Democratic Town Committee booth (pictured above) organized by Sam Poulten (in blue shirt with back to camera) and staffed by volunteers who sold slices of apple, cherry and blueberry pie, a truly patriotic array. I succumbed to a slice of apple and it was amazingly good (from Wilkins Farms in Pepperell). Of particular note was the presence of an authentic punch card ballot voting machine from Florida that was used in the 2000 Presidential election (left in the above photo). As someone who had plenty of pre-2000 experience with punch card ballot recounts, I can truly say that the US Supreme Court cost Al Gore the presidency with its decision to prevent a hand count of all ballots, but that’s another story.

The five Democratic candidates for the Third Middlesex State Senate seat, now held by Susan Fargo and consisting of Waltham, Bedford, Carlisle, Chelmsford, Concord, Lexington, precincts 3, 8 and 9, Lincoln, Sudbury, precincts 1 and 4, and Weston, were there in force throughout the night. Mike Barrett had his own booth and he, members of his family and supporters enthusiastically greeted voters. Also present, shaking hands and asking for votes were Mara Dolan, Alex Buck, Joe Mullen and Joe Goodwin. At one point I noticed Mullen, Buck and Goodwin standing within elbowing distance of each other and asked them to pose for a quick photo (below). Sorry to Mara and Mike for not catching them in a picture but I’ll try to make it up by directing you to their websites HERE and HERE. I’ll also note that the Republican Town Committee, Sandra Martinez (Republican candidate for state senate) and Scott Brown all had booths, too.

Thanks to the town of Chelmsford for a great kick-off to this year’s Independence Day celebration. 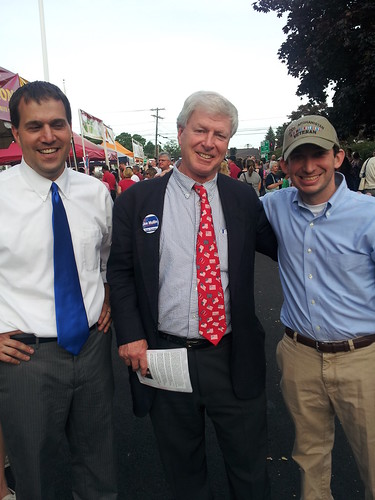 One Response to Chelmsford Country Fair