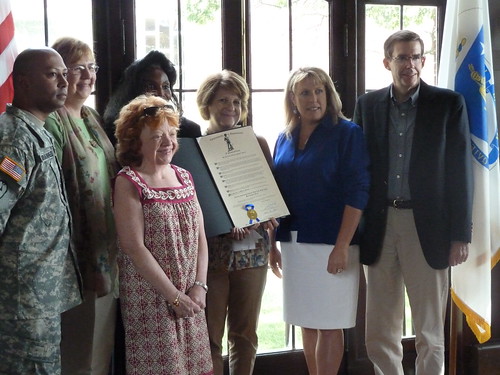 Yesterday (June 30, 2012) was Edith Nourse Rogers Day in the Commonwealth of Massachusetts per order of Governor Deval Patrick. In honor of the former Congresswoman from the Fifth Congressional District, a small ceremony was held at the Allen House of UMass Lowell where a proclamation from the governor was read followed by some brief remarks about Congresswoman Rogers. Participants in the program in the above photo from left are Major Kazim Mohammed of the UML Army ROTC program; Nancy Pitkin of the Pollard Memorial Library board of trustees; Martha Mayo, the director of the UML Center for Lowell History; Maria St. Catherine Sharpe of the Massachusetts Association of Women Veterans; Patricia Fontaine, a UML professor and Edith Nourse Rogers scholar; Janine Wert, the UML veterans services director; and me (Richard P. Howe Jr.).

The text of the Governor’s Proclamation was as follows:

A Proclamation by His Excellency Governor Deval L. Patrick

Whereas Edith Nourse Rogers’ involvement with veterans’ rights and issues began when she was appointed by President Warren G. Harding as the inspector of new veterans’ hospitals from 1922 to 1923, where she reported on conditions; and

Whereas upon the death of her husband, Congressman John Jacob Rogers while in office in 1925, and following a subsequent state election, Edith Nourse Rogers (R-Lowell) was elected by popular vote to serve as a Republican Congresswoman from the Commonwealth of Massachusetts representing the 5th District in the United States House of Representatives; and

Whereas Congresswoman Edith Nourse Rogers became the first woman from New England to serve in United States Congress; and

Whereas Veterans’ issues defined Edith Nourse Rogers’ career; she secured pensions for army nurses, helped create a permanent nurses corps in the Veterans’ Administration, and inserted a $15 million provision for the development of a national network of veterans’ hospitals into the Veterans Administration Act; and

Whereas Congresswoman Edith Nourse Rogers sponsored a package of measures later dubbed “the GI Bill of Rights,” which passed the House on June 22, 1944, when President Franklin D. Roosevelt signed The Servicemen’s Readjustment Act, among the chief provisions of which legislation were tuition benefits for college-bound veterans and low-interest home mortgage loans for veterans; and

Whereas Congresswoman Rogers’ crowning legislative achievements came when in May 1941, Rogers introduced the Women’s Army Auxiliary Corps Act, a voluntary enrollment program for women to join the U.S. Army; and

Now, Therefore, I, Deval L Patrick, Governor of the Commonwealth of Massachusetts, do hereby proclaim June 30th, 2012 to be,
Congresswoman Edith Nourse Rogers Day and urge all the citizens of the Commonwealth to take cognizance of this event and participate fittingly in its observance.