Thanks to City Manager Bernie Lynch and Acting Supt. of Lowell National Park Peter Aucella, several excellent groundskeepers from the City and Park last Thursday spent a few hours sprucing up Kerouac Park and the Jack Kerouac Commemorative (the sculptural tribute) on Bridge Street downtown in preparation for a video-taped report by the UK Travel Channel. The TV program, “American Times,” is broadcast in 118 countries with an audience of more than 30 million people. Kudos to Deb Belanger and the Convention and Visitors Bureau for organizing the visit to Lowell.  The SUN published a good story on the visit. The journalists were on a tour of about six places in the state for a one-hour special on Massachusetts. Their focus in Lowell was the local cuisine, the boxing heritage (Mickey O’Keefe of The Fighter and Lowell P.D. was interviewed), and Kerouac (the program host thought JK was from California because of books like Dharma Bums and Big Sur). The City and Park crew took care of the planting beds and lawn, trimmed low branches on the willows and other trees, removed some graffiti on the sculpture, and generally cleaned up. The area looked much improved for the TV taping. 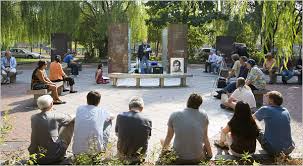