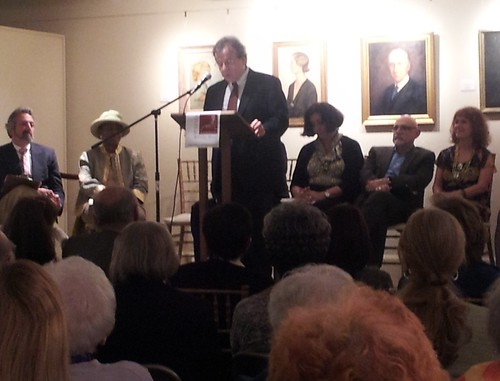 It was curiosity more than anything else that drew me to the Whistler House tonight for a retrospective on the work of Mary Boutselis Sampas who wrote for Lowell newspapers, mostly the Sun, for 75 years. I confess to being only an occasional reader of Mary’s columns. Perhaps that’s because my twin passions of politics and history kept me jumping from the city page to the obituaries and left little time for anything in between. Tonight I realized to my great regret what I had missed. Listening to a dozen and a half of her columns being read this evening was a thoroughly enjoyable experience that made me truly appreciate what a superb talent and a hard worker Mary Sampas was for an unbelievable three-quarters of a century.

When I arrived at the Whistler House for the 7 pm start, the room was already packed with a crowd that exceeded 130 admirers. The program featured readings of selected poems and columns on topics like Kerouac and Kennedy, Sinatra and Satchmo, and much, much more. What made the evening especially enjoyable was the excellent roster of readers on stage: Lura Smith, Paul Marion, Walter Bacigalupo, Effie Dragon, John Boutselis, Nancye Tuttle, Cathy O’Donnell, Michael Lally and Sara Bogosian (with Lew Karabatsos as the master of ceremonies) brought the cadence, timing and inflection of a professional theater cast to the readings. But the content was everything. There was humor, poignancy, great descriptions, more humor with everything seen through a Lowell lens.

Fortunately, a camera crew from Lowell Telecommunications was present, recording the entire evening for future playback (we’ll let you know when as soon as a date and time is set). In the meantime, check out the website of the Lowell Hellenic Heritage Association which has a number of Mary Sampas columns available online.