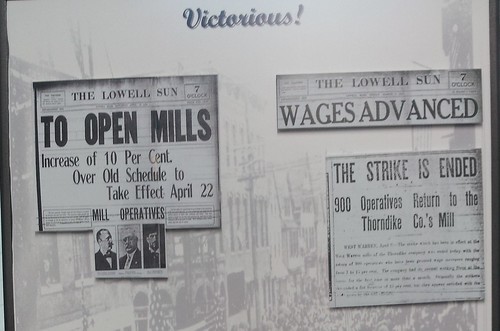 Tonight I attended an excellent program at the Tsongas Industrial History Center on The Lowell Textile Strike of 1912. The program was jointly organized by the TIHC, the Lowell National Historical Park, UMass Lowell, The American Textile History Museum, the Revolving Museum and the Bread & Roses Centennial Committee. The evening began with a reception in the lobby where explanatory panels created by UMass Lowell students told the story of the Lowell strike. Next, Sheila Kirschbaum, the director of the Tsongas Industrial History Center, welcomed everyone and gave some background about all the great educational work being done at the center. The group of about 50 attendees was then divided in two, with one group viewing a 20 minute documentary on the Lawrence strike followed by a discussion led by Bob Forrant. The other group went to the mock factory floor to partake in a hands-on exercise of life on the production line, the exact same exercise conducted for visiting school groups. The two groups then switched places and repeated the two activities.

When the groups re-united, Professor Dexter Arnold of the University of Illinois, Urbana-Champaign, discussed the Lowell strike which was the topic of his doctoral dissertation. Professor Arnold explained that during the Lawrence strike (February 1912) many workers from Lowell provided logistical aid and support to their ethnic brethren in Lawrence. This had the effect of raising the collective consciousness of Lowell’s workers regarding the issues in dispute in Lawrence. This increased awareness of labor issues caused an increase in membership in the IWW among Lowell workers. To head off further union activity, the mill owners of Lowell quickly offered a 5% raise but by then Lawrence had settled its strike with a 15% increase in pay, so the Lowell offer of 5% was unacceptable. The workers countered with a demand for 15% which was turned down immediately. This resulted in a walkout that rippled through the mills which was followed by mass meetings and intense organizing in ethnic neighborhoods. When picket lines formed the next day, the owners declared a lock-out, a tactic that had worked in a 1903 strike in Lowell. But in 1912, the workers were more unified and the market for cotton was more lucrative, so the owners eventually offered 10%. Although disappointed not to get 15%, the workers settled for 10%, hoping that cutting short the strike would allow their new-found solidarity to become a permanent condition of mill workers in Lowell.

It didn’t. Soon worker solidarity began fading and the mill owners re-asserted themselves. Still, Professor Arnold concluded that the 1912 job action in Lowell had been a success by forcing many positive changes in pay and working conditions. 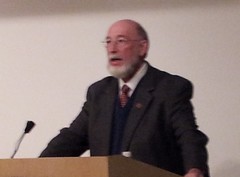 The next speaker was Ed Collins, the executive vice president of the Massachusetts AFL-CIO and a UMass Trustee. He spoke about the lessons of the 1912 strikes that might be applicable today. He said a major parallel between now and then is the extreme income inequality that existed in both eras. He spoke favorably of the Occupy Movement, saying that it is a great, spontaneous reaction that has tremendous potential to create positive change. He admitted that the labor movement recognizes that potential but is having difficulty finding the correct relationship between Occupy and Labor.

Mr. Collins next shared his opinion that the working class in America historically has been “its own worst enemy” by allowing wedge issues to divert attention from pressing economic issues. He said that every so often, working people rise above all the decisiveness and great progress is made although that progress is often eroded by succeeding generations. He said that no one person or small group can precipitate one of these moments; they happen more or less spontaneously. When they do occur there is a small window of opportunity to invoke substantial positive change but that window can easily be missed. Occupy, according to Mr. Collins, could be one such moment but he is unsure whether it will be an opportunity squandered. And thus ended a very interesting night. 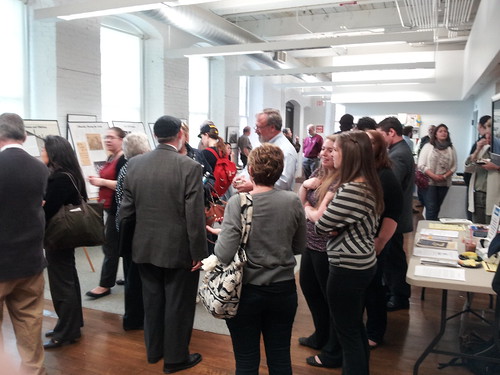 One Response to The Lowell Textile Strike of 1912