Our frequent contributor author Steve O’Connor sent along a bulletin of interest regarding Lowell and The Titanic, that doomed ocean liner much in the news with the centennial of the sinking due next month. Here’s the message received by Steve via a friend who grew up in Lowell and has lived in Virginia for 30 years, and who got the word from his own friend in Manchester, England:

Hi… I thought you may be interested to hear your hometown has been mentioned in our local newspaper—–The Manchester Evening News, in relation to a survivor of the Titanic.  There is a lot of press and television coverage at  the moment with regard to the sinking of the Titanic and the 100 year anniversary on April 15th.  It seems a Manchester born teenager Thomas Whiteley who survived, went on to give ‘value for money’ reviews, dramatic accounts of his experience to theatre goers at the Merrimack Theatre in your hometown of Lowell!!! Hope all goes well.—Mary 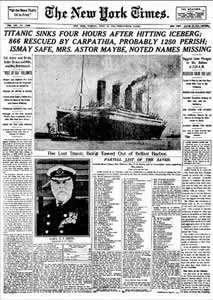