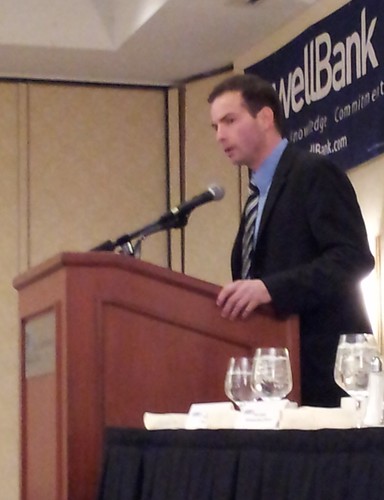 Lowell City Manager Bernie Lynch led off, saying that there has been and are many positive things happening in Lowell despite the on-going recession. Building permits are up. The remaining space in the Boott Mill complex is moving forward with both commercial and residential uses. The portion of the Massachusetts Mills closest to the intersection of the Merrimack and Concord Rivers, a prime location that has languished for decades because of questions about fire equipment access and historic preservation seems set to move forward after the city mediated a solution to the various concerns. Other major developments at Western Ave and Jackson Street are also progressing. The Lowell Community Health Center has consolidated its operations on Jackson Street which is vitally important since 25% of Lowell’s residents obtain some form of health care from that entity and the merger of Lowell General and Saints Memorial is a key development in the city’s health care infrastructure. Lynch said “we don’t have time to talk about all the great things underway at UMass Lowell, but it’s certainly the busiest time in that institution’s history.”

Transitioning to other topics, Lynch informed the audience that despite losses at the height of the recession, the number of private sector jobs in the city is the same in 2012 as it was in 2006. The manager also gave a shout-out to Howl-in-Lowell, calling it a “great new online publication about the city” and urging business leaders to take a look at it. Infrastructure-wise, work on the Hunt’s Falls and Central Street bridges was complete, the new bridge at University Ave is underway and the National Park recently received a major grant to extend the city’s trolley line.

Lynch said that city government was “in good shape.” There is a Capital Plan for the first time in the city’s history and the city is in better financial shape than it was six years ago. The city took advantage of the recession to make “institutional changes” need to make us more sustainable. The settlement of the health insurance issue with city unions was huge, saving Lowell 3 to 5 million dollars this year and up to $8 million per year in the future. Lynch concluded by saying “my fear going forward is complacency”, that as things get better there’s a temptation to “let loose” with spending whereas we should maintain the fiscal discipline that’s been forced upon us be the recession even though good times return.

Jodi Ross, the town manager of Westford, explained that town meeting had just concluded. The town did vote to construct a parking lot on the Bruce Freeman Rail Trail and voted to do a feasibility study on the possibility of an expansion to the library. The town has hired its first new police officer in 12 years and $360,000 was raised by auctioning tax title property. The major problem facing the town is a $3.7 million structural deficit. Health insurance is a huge issue, rising 15% per year and now constituting 10% of the overall town budget.

Dennis Piendak of Dracut said that the biggest challenge in Dracut was the because of the small percentage of the town (10%) being commercial property, the bulk of property tax revenue must come from residences which limits town revenue. When combined with cuts to state aid, this has created substantial fiscal pressure on the town. There are a number of specific challenges facing the town: Upcoming negotiations with the police union will center on how to deal with the Quinn Bill funding which was cut by the state. Health insurance is a “huge issue”; if the town could switch its employees to GIC (the state employee health care program) it would save up to $1 million per year. The golf course dispute between the property owner and the operator of the course is a big problem for the town. Another challenge is the cost of upcoming renovations to Greater Lowell Technical High School. As for the Dracut Schools, Piendak said that despite relatively low per pupil spending and “having more school superintendents in the last decade than the Red Sox have had shortstops”, students still receive a fine education in the Dracut schools.

Paul Cohen of Chelmsford said the opening of Stop and Shop on Route 110 was a big accomplishment since that was a gateway into the community. The new Lowell General Hospital facility at Drum Hill is also a great addition. The town was able to retain Kronos, the major high tech company in the town, by helping find room for expansion within the town. A big issue is what will happen to Center Plaza, the shopping center adjacent to the town center and the former home to Stop and Shop and Marshalls. Cohen explained that because of the distance of that site from any highway, developers won’t place a major retailer like Target of Lowe’s there but say it is only suitable for discount chains such as the Dollar Store. Chelmsford is striving to “think big” on this project, converting it to a mixed use development that would include both housing and retail, with the ultimate goal of making the place active in the evening and on weekends as well as during the workday with the hope that such activity would spill over and benefit businesses in the adjacent town center.

John Curran of Billerica said that the two biggest projects in town were the redevelopment of the mall space adjacent to the town center and the completion of the decade-long renovations to the Middlesex Turnpike. If all the business space along the Turnpike was occupied, it would be a huge benefit for the town. There is hope that the town center can be revitalized through the installation of Victorian lighting and brick sidewalks, but all that is dependent on moving utilities underground, a very expensive task. Curran is very encouraged by efforts to regionalize some government services and he believes Billerica has made great strides in attracting businesses in life sciences and emerging technology to town throug the use of TIFFs and other incentives. As he put it, “those companies aren’t moving their headquarters from Cambridge, but when they need to expand, we want them to think about Billerica.” He said such companies are attracted to this region because of the diverse labor market and because of the worker training opportunities offered by UMass Lowell and Middlesex Community College.

And that concluded a very informative morning. Thanks to the Greater Lowell Chamber of Commerce for hosting it. 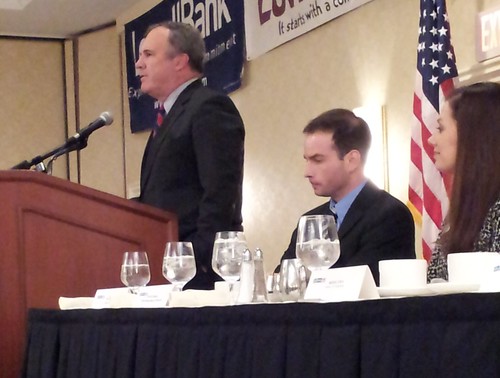