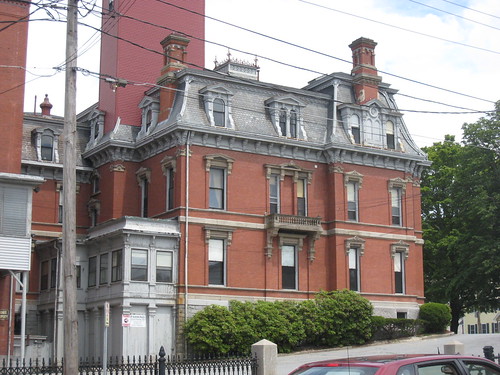 One of the regular stops on my Lowell Cemetery tour is the grave of Frederick Ayer. Mr. Ayer and his brother, James C. Ayer, attained enormous wealth and success through the sale of patent medicine. Frederick branched out into other areas, becoming the primary owner of the American Woolen Company which owned more than 60 mills throughout New England, including those involved in the 1912 Bread and Roses Strike in Lawrence. Also of note; Frederick’s daughter Beatrice in that same year married a young Army cavalry officer named George S. Patton (which is why there is a portrait of that famous World War Two general handing in the lobby of the Lowell Memorial Auditorium). When the Frederick Ayer family lived in Lowell, they resided in a large brick house at the corner of Pawtucket and School Street. The house, pictured above, is familiar to us today as the front portion of Lowell’s Franco-American School.

Because I’m constantly mentioning the Franco-American School in my historic talks, I’m happy to pass along news of an upcoming event sponsored by the school. On Friday, April 27, 2012 at 7 pm at Mt. Pleasant Golf Club, the Franco-American School will hold its annual fund raising auction, this year with a Wild West theme. More information about the event is available here.

One Response to Lowell’s Franco-American School