Bob Forrant, a professor of history at UMass Lowell and the chair of the Bread & Roses Centennial Committee, an organization dedicated to commemorating the 100th anniversary of the Great Lawrence Textile Strike, posted the following article on “The Public Humanist”, a blog operated by Mass Humanities. We repost the article here with Bob’s permission. 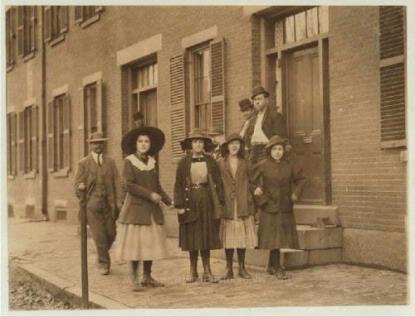 You both have an affinity for Howard Zinn’s A People’s History of the United States, and the more involved I am in commemorating the 1912 Great Lawrence, MA, Textile Strike—aka the Bread & Roses Strike—the more I think you two should make a movie about the strike. With me, of course, as head writer!

In 1912, Lawrence, Massachusetts, a leading industrial center, erupted into a long, sometimes violent struggle between mill owners and workers. The strike remains a landmark moment in the history of the United States. The cast of characters was immense. There were the thousands of workers from all over the world who lived under horrendous conditions. According to Lawrence physician Dr. Elizabeth Shapleigh, “A considerable number of the boys and girls die within the first two or three years after beginning work. Thirty of every 100 of all men and women who work in the mills die before or by the time they are 25 years of age.” The photo above of young mill workers walking to work at the Pacific Mill was taken by Lewis Hine in 1911. There are lots more photos of his we can look at to make sure we create accurate sets for the movie.

There was John Breen, Jr., the son of Lawrence’s first Irish-American mayor. An undertaker by trade, Breen was arrested on January 29, 1912 for planting dynamite in three locations that were popular strikers’ meeting places. Initially strikers were arrested upon discovery of the dynamite, but they were quickly exonerated. The newspaper used to wrap the dynamite was a popular undertakers’ trade journal, with John Breen’s name adorning the subscription label! Not too bright, huh? At his trial he was convicted of planting the dynamite to discredit the strikers. He did so at the behest of mill owners.

There was William Wood, who ran the American Woolen Company. Born in 1858 in Edgartown, MA, his parents were Portuguese immigrants from the Azores. In 1923 Wood told an American Magazine reporter “I started to work. That was where my good fortune began. Work is whatever you make it: hardship or happiness, a punishment or a pleasure. I have worked practically all my life and I love it. A man who doesn’t work not only shirks his duty but misses the greatest satisfaction” (quote from Bruce Watson’s Bread and Roses). One wonders if he’d have taken such great pleasure out of working 60 hours a week in one of his mills? Financial success did not buy him happiness, and on February 2, 1926, Wood committed suicide.

Then there’s one of my personal favorites, “the Rebel Girl,” Elizabeth Gurley Flynn. Born in New Hampshire, her family moved to New York in 1900. At 16 she gave her first speech, “What Socialism Will Do for Women,” at the Harlem Socialist Club. Author Theodore Dreiser described her as “an East Side Joan of Arc.” She was everywhere in Lawrence during the strike, rallying the workers, and outsmarting the militia that patrolled city streets. In her autobiography she described the strike scenes she witnessed: “As the terrible New England winter dragged along the terror and violence increased. On February 19, 200 policemen with drawn clubs routed 100 women picketers. A Boston newspaper described the scene: ‘A woman would be seen to shout from the crowd and run into a side street. Instantly two or three police would be after her. Usually a night-stick well aimed brought the woman to the ground like a shot and instantly the police would be on her, pulling her in as many ways as there were police.’”

If I don’t hear back from you soon, I’ll write again about other characters that might populate our movie, or I just might shop the idea to George Clooney and Sean Penn. The list includes Joseph Caruso, Joseph Ettor, and Arturo Giovannitti, Italians thrown into jail for 10 months accused of murder, and Ellen Hayes and Vida Scudder, prominent professors at Wellesley College. Scudder visited Lawrence to speak at a strike meeting and said: “I speak for thousands besides myself when I say that I would rather never again wear a thread of woolen than know my garments had been woven at the cost of such misery as I have seen in this town.” This stirred up controversy and led many at Wellesley to demand that Hayes and Scudder resign. If you write back, I’ll tell you what happened to all of them.

If you want to learn more check out: exhibit.breadandrosescentennial.org