My only complaint about tonight’s performance of “The Crucible” by the Lowell High School Drama Club is that there was only one performance. If it was being done again tomorrow I’d go see it again and would urge everyone reading this to do the same. The two dozen LHS students on stage tonight were amazing, giving passionate, professional-level performances that had the audience on the edge of its seats for much of the play.

“The Crucible“, of course, is the Arthur Miller play about the 1692 Salem Witch Trials which also provided some not-so-subtle commentary about the era in which Miller wrote it, the era of McCarthyism and aggressive anti-Communism. The play is not the least bit dated, however, because the message it conveys has application in our own turbulent times. The austere staging and the stilted 17th Century language of the script allowed the talented and obviously hard-working cast to transport the audience back to a time when mass hysteria pushed good judgment aside with deadly consequences. So thanks to the cast, the stage crew, director Sharon Bisantz and the staff and students of the LHS Fine Arts Department for a job well done. 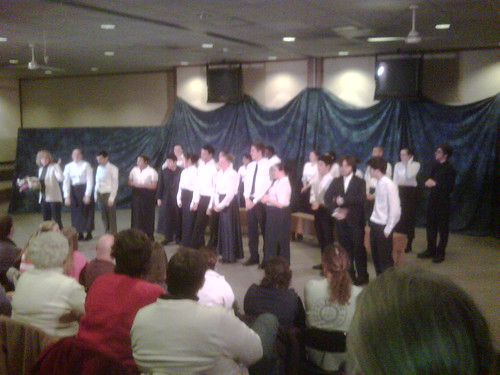 The cast and director Sharon Bisantz receiving the audience’s ovation at the close of tonight’s performance of “The Crucible” at Lowell High’s Little Theater.

5 Responses to “The Crucible” at Lowell High