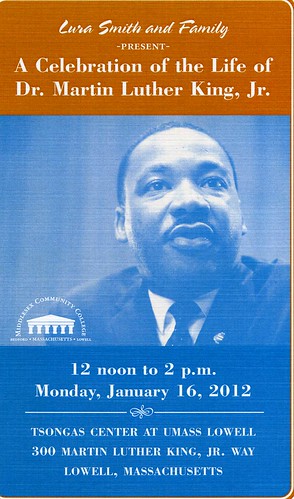 Today in the sun-drenched lobby of the Tsongas Center at UMass Lowell, the 14th annual Lura Smith and Family celebration of the life of Dr. Martin Luther King Jr. took place. For two hours, the crowd was transported and inspired by prayer, music, dance and inspirational words. The annual “Living the Dream” award was presented to Kevin Harkins, who has documented all prior instances of this event (and many other Middlesex Community College events) with his camera. According to Lura Smith, the award is a clock which symbolizes the time donated by Kevin and the never-seems-to-be-enough time to do the things we want to do.

In attendance were Congresswoman Niki Tsongas, Lowell Mayor Patrick Murphy, City Councilor Marty Lorrey, City Manager Bernie Lynch and MCC President Carole Cowan. In his remarks, Mayor Murphy said that with all of Martin Luther King Jr’s accomplishments, what is often lost is “how truly revolutionary he was in his pursuit of peace” and that it’s very easy for politicians to take the dividends of King’s success while ignoring the continued injustice around us. Murphy went on to say that January 16 should always be a reminder of the energy and purpose that are both necessary to continue King’s work which is far from done and that we honor King most when we ensure that his work goes on in each of our lives.

The following YouTube clip shows video of Martin Luther King interspersed with some of his most famous sayings, all set to the James Taylor song, “Shed a Little Light”, which was performed masterfully in Lowell today by Dracut’s Danny Webster: