Reporter Patricia Cohen in today’s NYTimes described how folksinger Woody Guthrie will finally get his due in the place of his roots, Tulsa, Oklahoma. Local activists kept the tribute flame alive for the past many years, and now the Kaiser Foundation, based in Tulsa, has put up $3 million to buy the Guthrie archives and will lead the effort to build “an exhibition and study center” in downtown Tulsa.

The foundation, which paid $3 million for the archives, is planning a kickoff celebration on March 10, with a conference in conjunction with the University of Tulsa and a concert sponsored by the Grammy Museum featuring his son Arlo Guthrie and other musicians. Although the collection won’t be transferred until 2013, preparations for its arrival are already in motion. Construction workers are clearing out piles of red brick and wire mesh from the loading dock in the northeast end of the old Tulsa Paper Company building, in the Brady District of the city, where the planned Guthrie Center is taking shape. The center is part of an ambitious plan to revitalize the downtown arts community. 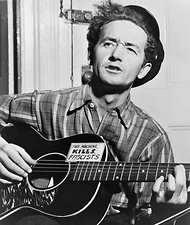