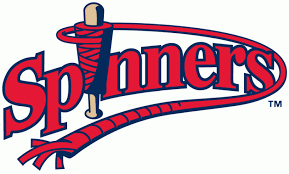 Thanks to the sports gurus at the Lowell Sun we are reminded that on this day – December 22, 1995, Clyde Smoll – owner of a New York-Penn League baseball team announced that he would bring the team to Lowell, Massachusetts. The team would be an affiliate of the Boston Red Sox. It would be the first minor league baseball team in Lowell in 49 years. Later nicknamed the “Spinners” – the team now makes its home at LeLacheur Park on the Merrimack River.

The Spinners will celebrate their 17th season in Lowell in 2012, as a Class A Affiliate of the Boston Red Sox. The present owner – Drew Weber – has owned the team since 1997. Read more about the franchise history here on the Spinners website. The 2012 season opens at home on June 18, 2012.

One Response to “Spinners” Bound for Lowell