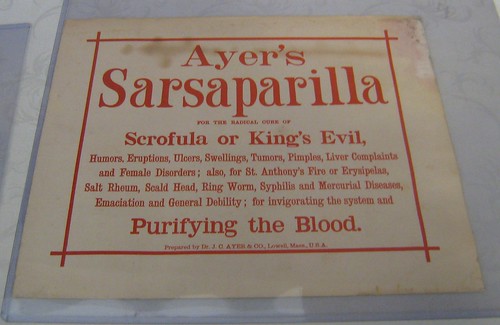 Yesterday I attended an outstanding program presented by Cliff Hoyt and the Lowell Historical Society on “J. C. Ayer and Company during the Civil War.” The Lowell-based Ayer company was one of America’s most prominent producers of patent medicine during the nineteenth century. Its founder was James Cook Ayer who lived in the “stone house” on Pawtucket Street (opposite Fletcher) who quickly brought in his brother, Frederick Ayer (whose house is now the Franco-American School) into the business. Both brothers and their families are buried in the Lowell Cemetery and are prominent stops on the tours I give during the year. It was wonderful to learn more about the company that made these brothers famous from an expert such as Cliff Hoyt (shown below). Here are some of the highlights:

Ayer’s first medicine was Cherry Pectoral in 1843. It was advertised as treatment for throat and lung diseases but it was basically a cough medicine. It was given a lot more credit than it warranted. Collectively, the medical field back then didn’t understand or treat bacteria or viruses but treated the symptoms. Patients tended to get better because by treating the symptoms, the patients were able to sleep better, eat better because the symptoms were suppressed and they tended to recover.

In 1853, Ayer brought out his second medicine, known as Ayer’s Cathartic Pills. This was a laxative but it was very strong, much stronger than the comparable product now. Ayer made claims for the pills that were greater than they deserved, but everyone else did the same and it wasn’t meant to be deceptive: they all thought their claims were accurate.

In 1858, Ayer brought out his third medicine, Ayer’s Sarsaparilla which was a “blood medicine” that was intended to remove “poisons” from the blood. It purportedly treated things such as syphilis, consumption and skin diseases. Sarsaparilla did not work.

Also in 1858, Ayer brought out his fourth medicine, Ayer’s Ague Cure. Ague was a fever that reoccurs and later became known as malaria. Ayer made this medicine from the bark of the cinchona tree. The resulting substance later became known as quinine and it was very effective in treating malaria. Besides the quinine, Ague Cure also contained alcohol and flavoring.

Those were Ayer’s earliest products. Mr. Hoyt then discussed the term “patent medicine” which he claimed was a misnomer because none of these medicines received actual patents. [Note: I’ve read that the term “patent” has nothing to do with the US patent system but refers to the English practice of the king designating an “official product” of the monarchy which then allowed the product maker to claim that it was the “patent” product). Hoyt believes that the “patent” label was actually a negative connotation placed on these products by doctors who opposed their use. Why did doctors dislike Ayer’s medicines and other like products? Hoyt suggested several reasons: (1) The “off-the-shelf” nature of Ayer’s product took doctors out of the equation, costing them money, credit, and led to patient self-diagnosis); (2) The medicines appeared to be cure-alls meaning they could cure many things while doctors believed slightly different ingredients were needed for different diseases; (3) although Ayer always disclosed his ingredients to doctors and pharmacists, many patent medicine makers kept their ingredient list secret and may have included harmful substances in the products; (4) Ayer and his competitors advertised heavily which doctors found to be unseemly.

Ayer’s original manufacturing facility was on Jackson Street. During the Civil War, he also began operating on Market Street and finally opened an adjoining building on Middle Street (the current Ayer Lofts).

As for the ingredients, Ayer’s Cherry Pectoral contained 3 grams of morphine but this was a smaller quantity than most doctors prescribed. Most of Ayer’s medicines also included alcohol but there was a practical reason for this: the main ingredients were vegetative and the alcohol acted as a preservative. According to Cliff, however, you could not consume enough of the medicine to feel the effects of the alcohol without first becoming sick from the other ingredients. 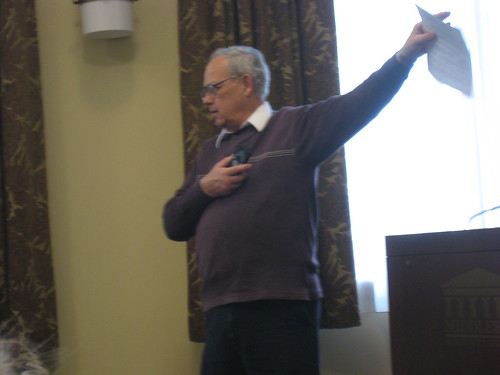