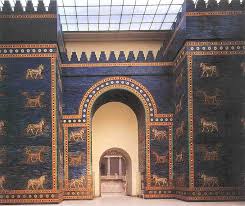 This is a reproduction of the Ishtar Gate built by King Nebuchadnezzar II at the entrance to Babylon about 600 years before Jesus of Nazareth was born. You can’t see it in Iraq these days, but there’s a version in a German museum that was built in the 1930s from remains unearthed by archaeologists around 1910. The gate was considered a Wonder of the World for a thousand years. (Thanks to Wikipedia for the information.)

An image of the gate tops the menu of Babylon restaurant at 25 Merrimack Street in downtown Lowell. By 7 p.m. last evening, there was a line of people waiting for tables to open up. The place seats about 50. If a patron stopped talking and listened for ten seconds, he or she heard the glad buzz of Middle Eastern music and customers digging in to plates of beriyani, kebabs, fatoosh, and grape leaves. I was in a party of ten that ordered, among other items, the extraordinary Babylon Chicken, a whole roasted and boned chicken stuffed with savory rice and ringed with vegetables. I assumed that it was a Friday night entertainment crowd, especially ticket-holders for author David Sedaris’s show at the Auditorium, but when we left twenty minutes before showtime the place was still packed. If it was a Sedaris crowd, then the creative economy formula is a success in Lowell. Friends of mine who ate at Cobblestones reported that it was busy as well.

The coincidence of being in Babylon for dinner on the day President Obama announced that all US military forces would be withdrawn from Iraq by the end of the year made the evening all the more complex. In the moment the varied streams of history converged in a small eatery that not long ago sold pizza and is now run by Iraqis who would not likely be in Lowell except for the horrific war with its tangled start in 2003. Three friendly young women moved swiftly among the tables while an older man wearing a sport coat (the father of one of the women, I was told) stayed close and helped with small tasks.

There we were in a new restaurant run by people from a country with highway signs for Babylon—a surreal layering of culture and civilizations. From the fertile crescent of Tigris and Euphrates rivers to the confluence of the Concord and Merrimack. We were eating the food of another country in which our armed forces had fought (and still fight)—like ordering take-out from the Viet-Thai near City Hall. Displaced people find their way to American Lowell and figure out that they can cook for a living. Meanwhile, my French-Canadian ancestral ghosts hover over the bean pots, small plastic tubs of corton, and single-servings of Chinese Pie at Cote’s Market. A few hundred years of European settlers in North America seems like nothing when you are contemplating the third millenium B.C., Mesopotamia, Hammurabi, and the Chaldeans.

The funny, wryly kind, sarcastic, and semi-raunchy Sedaris nearly filled the house at LMA, a feat for an author. He read a few stories-in-progress, shared clever diary entries, and did what amounted to a stand-up routine during question time at the end of his 100 minutes. He’s achieved what most writers set out to do in creating a distinctive voice and gone beyond that by gaining a place as an American original. With merciless honesty and crafty exaggeration, he tells us what he remembers and has done, and what he observes today in the endless human follies.

Kudos to Pete Lally, Tom McKay, and the LMA team for presenting Garrison Keillor and Sedaris in recent months. Before and after the reading, Sedaris signed piles of books in the lobby for eager readers. He’s got a good thing going. Not only is Sedaris pushing his books on this 41-city tour, but his “performance” includes praise for books by other authors. Last night he was extolling the virtues of “Two Years on the Yangtze” by Peter Hessler, a journalist and former Peace Corps volunteer who this year was awarded a MacArthur “genius grant” Fellowship. Buy the book, cheered Sedaris, an unusually generous gesture in the author business.