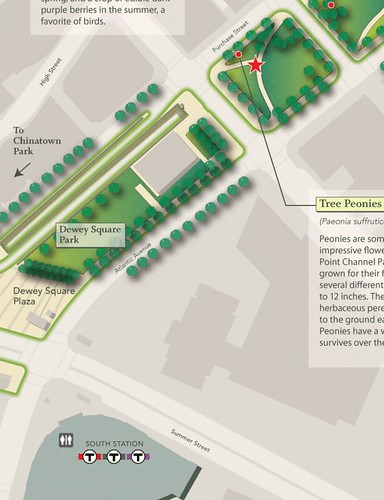 The Occupy Boston protest has been much in the news lately. The map above shows the portion of the Rose Fitzgerald Kennedy Greenway in which most of the action has taken place. To the lower left is South Station; the darker gray shape across Summer Street is the Federal Reserve Bank of Boston. Just across Atlantic Avenue from both is Dewey Square, the public park in which the protestors have built their encampment. The green space extending up and right from Dewey Square is the start of the Greenway. The block depicted by the red star is where the one hundred plus arrests of protestors occurred the night before last. That’s the geography, the easy part.

The hard part is trying to understand just what is going on both in Boston and around the country. Why people are protesting against the established political and financial system should be no mystery to anyone. Former Florida Congressman Alan Grayson, appearing on a program with Bill Maher and conservative pundit P J O’Rourke (seen in this video) put it pretty well when he said people are frustrated because no one has been held accountable for Wall Street’s wrecking of the world economy and that relying on the established political process for reform is futile since one party (Republican) is a “wholly owned subsidiary” of Wall Street and “the other party (Democratic) caters to them as well.”

When people lose hope that the established system will treat them fairly is when large protest movements emerge. I think we have reached that stage. The election of Barack Obama gave many people hope that the reckless policies that have decimated the American middle class would change. But they did not change: the losing bets of the Wall Street risk takers were socialized. While the bankers who got us into this mess not only escaped indictment but were rewarded with tax payer supplemented bonuses, middle class benefits – student loans, the home mortgage interest deduction, social security and medicare – have been placed on the chopping block to pay for it. Where’s the fairness in that? With the Democrats having struck out in their opportunity to salvage the economy and the Republicans advocating a return to the policies that got us into this mess in the first place, what choice do people have but to toss aside standard operating procedures and to seek change through non-traditional means?

I’m certainly not anointing the Occupy Boston participants as modern day Sons of Liberty (and besides, after the Tea Party’s hijacking and distortion of the actions of our Revolutionary War generation, who wants to go down that path right now). Spending a few nights in a public park during a balmy stretch is easy; when the cold sets in as it soon shall, it’s not as easy to survive overnight outside. The protesters might physically depart but I believe they will be back in one form or another and their ranks will continue to grow because the established system offers no alternative to reasonable people. Will there be revolution? Unlikely. Throughout the history of the United States, as soon as a protest movement grows large enough, one or both of the major political parties co-opt the goals of that protest movement and the need for radical change is dissipated through the normal workings of the political process. That’s the way it has always worked and as bad as things are today, I’m confident that is what will happen now. However, the timetable is uncertain – several if not many years at a minimum. In the meantime, Boston city officials (acting through the police) and the protesters engage in an intricate public relations dance, each trying to gain the upper hand in the court of public opinion.