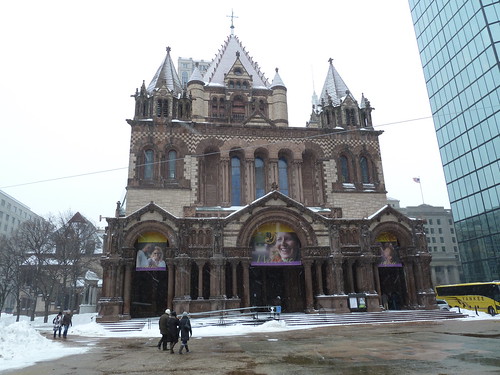 Mass Moments, the daily dose of Massachusetts History tells us that today is the birthday of Henry Hobson Richardson, one of the most important and influential architects in American history. Richardson was born in Louisiana in 1838, studied in Paris, did much of his work in Boston, and died in 1886. Perhaps his most famous work is the Trinity Church in Boston’s Copley Square, shown above. Richardson’s Wikipedia page is HERE and the full Mass Moments essay is HERE. The latter explains that from early America until after the Civil War, there was no truly American style of architecture, but that . . .

Henry Hobson Richardson would change that. In 1866 he won the commission for the First Unitarian Church in Springfield, Massachusetts. At a time when most churches were being designed in the English Gothic manner, with pointed arches and towers, Richardson chose an original blend of rounded Roman arches of stone, freshly interpreted with varied colors and textures, to create a massive, monumental effect. The project was a success, and other church jobs followed. In 1872 he won what may have been the most important commission of his career —Trinity Church in Boston’s Copley Square. With its massive stone walls, supported by dramatic rounded arches and relieved by gables and turrets, and an inventive use of color, Trinity Church is a masterpiece. Richardson’s practice grew dramatically.