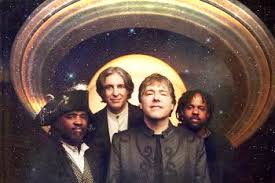 Just back from Boarding House Park and what some audience members described as a “life-changing experience” after 2.5 hours of musical immersion in the art of Bela Fleck and the fabulous Flecktones. I don’t know the vocabulary of the banjo, but Mr Fleck coaxes out of it a sophisticated sound that is its own language, a whole dictionary, maybe encyclopedia, of distinctive sounds (in the spirit of folk-grass, jazz, blues, classsical, country, pop, soul, you name it) that make a harmonious union with the other instruments and players on stage.

Mr Fleck’s reputation as an artist makes him known to even the uninitiated. One of his bandmates tonight announced that Mr F has been nominated in more categories and more times than anyone else on the Grammy list. That’s a feat. I can see, or hear, why after having the show wash over me tonight. The Lowell Summer Music Series is getting to be a “Can you top this?” operation. After Joan Baez, Lyle Lovett, and Chris Isaak in the past two years, the organizers keep climbing the ladder of excellence.

There was a packed park tonight on the front lawn of the Mogan Cultural Center. I don’t know numbers, but I’d guess a couple of thousand people or near that figure. The gray sky kept squeezing rain on the audience for the first half of the performance, which prompted Mr Fleck to call an audible and cancel intermission for fear the drizzle would worsen. As soon as his ensemble swung into the second half of tunes, the rain stopped and never returned. It was clear sailing through the second set, and what a set it was with extended improvisation by virtuosos on harmonica and piano (Howard Levy), bass (Victor Wooten), and an invention that I think was called a “drumtar” (Futureman)—a drum machine shaped like a sawed-off guitar. Special guest Casey Driessen on fiddle/violin lifted several compositions to higher orbits, in keeping with the recent release “Rocket Science.”

Lowell continues to be the platform for the best in the arts. The National Park Service, Lowell Festival Foundation, and all the series’ sponsors and partners deserve wild applause for their contribution. It all adds up, it’s all cumulative, and I’m convinced there’s something bigger going on here than even close observers realize. The high quality experiences, good news, and social and cultural capital being created day by day is yielding important results, and the yield will only increase as the months and years advance.