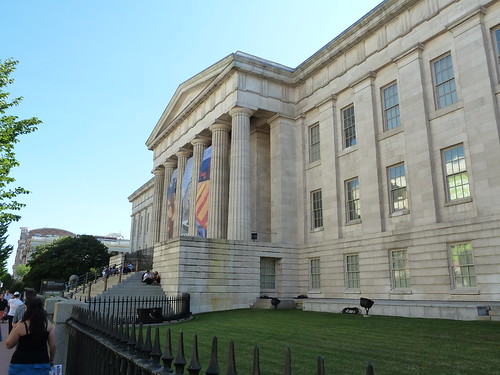 During my recent trip to Washington, I visited the National Portrait Gallery which shares space with the American Art Museum. Since both are part of the Smithsonian system, they are absolutely free to visit – a noble example of our tax dollars at work. Besides viewing the art inside the museum, the building itself (shown above) demands attention of its own. Constructed and used as the Patent Office throughout the 19th Century, this Greek Revival Structure served as a hospital during the Civil War. It was here that Walt Whitman tended wounded soldiers while performing his duties as a medical orderly. The patients were temporarily displaced in March of 1865, however, when the building became the site of Abraham Lincoln’s (second) inaugural ball.

One of the current exhibits in the National Portrait Gallery is of leaders of the Civil War. As soon as I entered the room housing that exhibit, I recognized the familiar face of Lowell’s Ben Butler, whose likeness is flatteringly captured in a marble bust (shown below) by the artist Edward Augustus Brackett. The sculpture was given to the Smithsonian by the children of Oakes and Blanche Ames.

The panel that explains the Butler Bust does the Lowell General’s legacy no favors. Here’s what it says:

Benjamin F. Butler was a Massachusetts politician who, as a delegate at the Democratic presidential convention in the spring of 1860, voted for Jefferson Davis on the first fifty-seven ballots. A year later, at the start of the Civil War, Butler was one of the first to answer President Lincoln’s call for troops to protect Washington. Appointed a major general of volunteers by a president desperate to find able officers, Butler proved to be largely inept at military command. Ultimately, General Grant requested Butler’s removal late in the war, and Lincoln sent him back to his home in Massachusetts.

Butler was a Democratic politician in military garb fighting a Republican war, and he sorely tried the patience of Lincoln and his advisers. His heavy-handed administration of the military district of New Orleans in 1862 was especially controversial. Butler was accused of everything from issuing orders designed to harass female secessionists to pilfering the silver spoons from the house he occupied.

In the summer of 1864, Butler wrote his wife asking if she wanted to see him. If so, he continued, “Do the next best thing – send down to Brackett and get the marble bust he has done.” 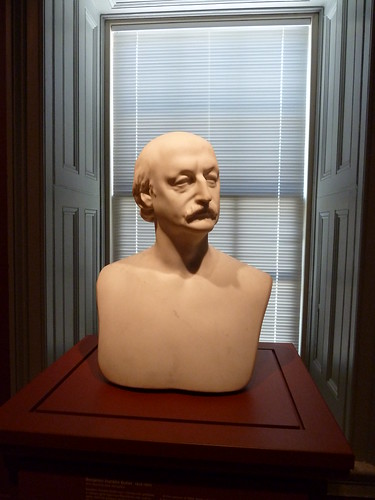 2 Responses to Ben Butler at the National Portrait Gallery