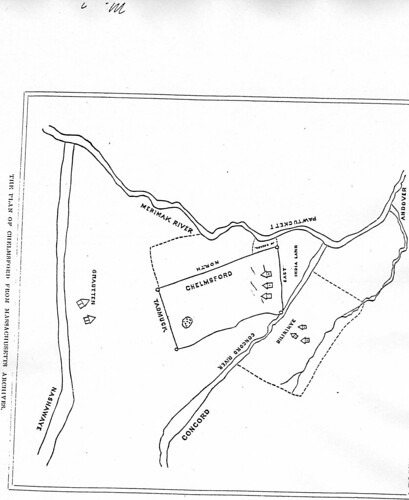 Mass Moments, the electronic almanac of Massachusetts history, reminded us that yesterday was the 336th anniversary of the start of King Philip’s War which, when measured by the percentage of population killed, was the deadliest war in the history of North America. Although the fighting broke out in Plymouth, it eventually spread to the Merrimack Valley. In the spring of 1676, Groton had been burned and Chelmsford and Andover had experienced raids by native warriors. Eventually, the colonists prevailed and either killed or drove out of southern New England almost all of the indigenous people. Ironically, the consequences of King Philip’s war played a major (if little understood or appreciated role) in the subsequent founding of Lowell 150 years later.

The first English settlers came to this vicinity in 1653 when a group of 29 men from Woburn and Concord petitioned the General Court to grant a charter for the town of Chelmsford on six square miles “of upland and meadow” bordering the Merrimack and Concord Rivers. The parcel sought by these settlers (which included what is now downtown Lowell) was already occupied by the Pawtucket Indians who called their settlement Wamesit. Fortunately for the Pawtuckets, a minister named John Eliot had began visiting them annually in 1647 and had converted the tribe to Christianity.

Because Eliot was committed to the actual as well as to the spiritual well-being of the Pawtuckets, he intervened in the Chelmsford petition and requested the General Court to grant the Indians a charter for the land which they had long occupied and cultivated. The legislature did just that, granting the Pawtuckets 1000 acres on the west bank of the Concord River (downtown Lowell) and 1500 acres on the east bank (Belvidere) for a town to be called Wamesit while also granting the Chelmsford petition albeit for land farther west along the Merrimack (shown on the 1650s sketch map that appears above).

Twenty years later, the colonial paternalism towards the Indians of southern New England was shattered by King Philip’s War. While there is no evidence that the residents of Wamesit ever took up arms against their English neighbors, they were still ejected from their land and forced to flee to Northern New England.

With Wamesit largely abandoned, eventually a group of settlers that included Jonathan Tyng, Daniel Hinchman and Jerahmell Bowers contacted Wannalancit, the leader of the Pawtuckets, and convinced him to sign a series of deeds that conveyed all of the Wamesit land to a loosely organized group called “The Proprietors of Wamesit Neck.” Because the new owners of the land were already settled in adjacent towns, they used the Wamesit land primarily to expand their own farm and grazing lands without embarking on much new building construction. The few people who actually moved their homes into Wamesit considered themselves to be part of Chelmsford, although the General Court still saw Wamesit as an independently organized community.

The sparse settlement patterns persisted, however, and the former Wamesit grant remained largely agricultural and sparsely inhabited with none of the pressure to create an infrastructure of meeting houses, school rooms, and family residences that normally accompanied the creation of a new town. This condition persisted until that day in November 1821 when Nathan Appleton and his associates arrived to find what amounted to a strategically located vacant lot upon which they could build their revolutionary industrial city that became known as Lowell.