I’m thinking about stories this morning, when media waves around here are dominated by reports about the capture of criminal Whitey Bulger near Los Angeles. What about all the people whose lives are entwined with this man’s almost stranger-than-fiction life story? Consider the trail of death and destruction he dragged behind him like some grotesque dragon’s tail, even while he was atop the Wanted list and on the run from the FBI.

When I read about him over the years he took shape in my mind’s eye as the ultimate bully: Bully Bulger. In the L.A. Times article breaking the news overnight, the reporter made sure to mention the Scorcese movie “The Departed” in which Jack Nicholson plays “a Bulger-like character.” There was evil depicted on film.  His crimes and those of his associates fed the narratives of a stack of books. I read “Black Mass” by Dick Lehr and Gerard O’Neil, describing the “unholy alliance” between the “Irish mob” and the FBI, and “All Souls” by Michael Patrick MacDonald, which is a side view of the damage in the neighborhood. 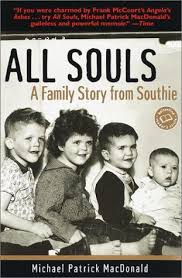 Threads of Bulger’s dastardly Winter Hill embroidery tangled themselves in countless lives, poisoning families and friend-networks permanently in some cases. “Organized” crime—what a sinister adjective for that noun, emphasizing the deliberate, intentional, willed damage applied in businesslike fashion as if it is another career path, a job category, an economic sector. And what about the public fascination with such activity? “The Godfather” movies, HBO’s “The Sopranos,” Brian De Palma’s “Wise Guys” film, Ben Affleck’s “The Town”—all of these fictions have roots in true stories. Is it some kind of cultural echo of the American Wild West mythology with guys in white or black hats shooting each other and robbing banks? The Wells Fargo stagecoach becomes an armored car to knock over? But these Boston area criminals were not just hitting banks because “that’s where the money is,” they were preying on weak links everywhere.

Other than second- and third-hand accounts of those killed or ruined in some way, I don’t know those stories, but I’m thinking about the other stories of those left to pick up the pieces after the bad guys and their tornado roar through somebody’s life. The newscast will move to the next lead story and the headline will change on paper or on screen. The consequences. Those stories are more difficult to assemble and relate than the crimes of the day. What happens after? The sister of Bulger’s woman-friend told a reporter that she wants her sister to come home.