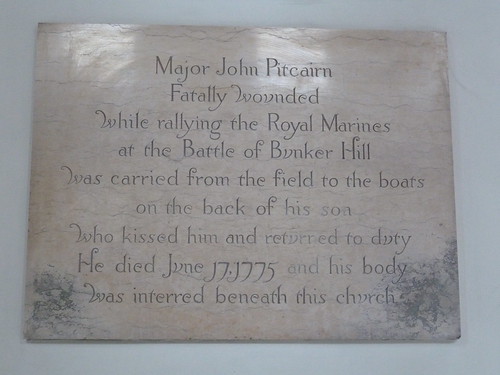 Yesterday was the anniversary of the Battle of Bunker Hill. The battle is noteworthy because it was the first major engagement between the colonial militia and the British troops. Eight weeks earlier, an intense fight had occurred at Lexington, Concord and on the route back to Boston, but while those who participated in that engagement knew it was real combat, others – particularly many in England and those in the southern American colonies – viewed the April 19, 1775 episode as an unfortunate accident. Relations between England and the American colonies they believed could still be salvaged. After Bunker Hill, however, with its heavy casualties on both sides and the demonstrated willingness of the Americans to fight the British in a classic battle setting, the point of no return was passed and everyone became committed to an all-out war.

The plaque pictured above hangs in Boston’s Old North Church. It marks the death of British Major John Pitcairn who ironically was the on-scene commander of the British detachment that opened fire on the Lexington Minutemen on April 19. The plaque reads as follows:

Major John Pitcairn
Fatally Wounded
While rallying the Royal Marines
at the Battle of Bunker Hill
was carried from the field to the boats
on the back of his son
who kissed him and returned to duty
He died June 17, 1775 and his body
was interred beneath this church