The entry below is being cross posted from Marjorie Arons-Barron’s own blog. Check it out. 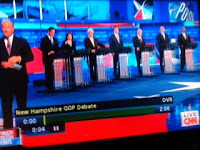 No matter how unimpressive a party’s candidates for President in the beginning, by fall of 2012 at least one of them will seem Presidential. The Democrats’ underwhelming field in 1992 yielded Bill Clinton, who was a successful, two-term President despite being impeached for sexual lies. The current crop of GOP candidates, who debated Monday night in New Hampshire, were all presentable for this stage of the process. There were no egregious errors. My sense: at the end of the day, both Mitt Romney and Michele Bachmann came out as “winners.” 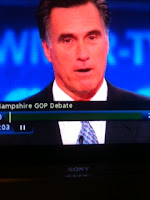 Putative front-runner Romney made no mistakes, was composed, didn’t waver with supposed vulnerabilities, looked the part and, even if you disagree with him on one or another issue, didn’t offend. What’s more, the other candidates focused on Barack Obama’s short-comings rather than taking pot shots at Romney. Even Tim Pawlenty, who had the day before linked Romney care with Obama care, danced away from it in the debate. When the other candidates refused to fault Romney on his flip-flop on abortion, moderator John King got them to agree that “the case is closed” on the authenticity of his position. So Romney sailed through the evening, even disingenuously saying that any of the field would be better than Obama.  (Full disclosure: I like Romney personally. For years, he was a back-up panelist on my Five on Five program on WCVB-TV.) 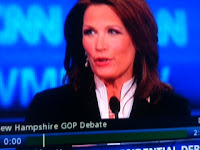 Minnesota Representative Michele Bachmann, while sparkling with slogans and sound bites, was no less substantive than Rick Santorum or Pawlenty. Nowhere evident was the wild, even out-of-control Tea Party Caucus chairman or the person whose really dumb quotes have been rivaled only by Sarah Palin. And who knew that, in addition to being a Congresswoman and, formerly, a corporate tax attorney, she is mother of five and foster-mother of 23! She soared here because expectations were so low.
The others neither distinguished themselves nor embarrassed themselves. Pizza businessman Michael Cain had the least to recommend him, but no one is taking him seriously.

With some slight differences among them, all of the Republicans would create jobs by cutting taxes – especially corporate and capital gains – and regulation, as well as repeal Dodd-Frank and the EPA. None would have supported the bail-out for the auto industry, which may have saved over a million jobs and which is being paid back.

All would repeal Obama-care and, in varying degrees, introduce more market dynamics into Medicare. Most preferred the old “don’t ask; don’t tell” approach to gays in the military but would listen to the military before going back to it. Gay marriage would be a no-no for all, with Pawlenty, Romney, Gingrich and Bachmann favoring a Constitutional ban on it.

The consensus was that Obama had failed in growing the economy, controlling the growth in government and, but for the demise of Osama bin Laden, failed in foreign policy. Former Ambassador John Huntsman, who did not participate in the debate, no doubt will have more light to shed on the latter. With Independents able to take either ballot in the New Hampshire primary and no contest to lure them into the Democratic side (Remember Obama v. Clinton in ’08), they could play in the GOP arena and provide surprising support for Huntsman.

This debate was too much to cover with too many candidates. Future debates should focus on particular issue areas, e.g., the economy, energy and the environment, foreign policy and so on. For now, though, the Republicans are off to a decent start.
Please let me know your thoughts in the comments section below.