In the mid-1960’s there was a boomlet of interest in Unidentified Flying Objects, yes, those pesky UFO’s. In my semi-rural suburban neighborhood in Dracut there was a phase one summer when some people stood on their porches and in the backyards and looked up at the star-packed sky. They were hoping to see something other than a passenger plane on a night flight. It was a little spooky if you were 10 or 12 years old. But very interesting. There was a lot of science fiction on TV in those days: The Outer Limits, Fantasmic Features with Feep, the Twilight Zone, and Star Trek (which started in 1966). A famous UFO incident in Exeter, New Hampshire, was recounted in a best-selling book “Incident at Exeter” in 1966. And then there was another book in 1966 about the Betty and Barney Hill case in 1961: two people who claimed they were abducted by aliens somewhere along a highway in the White Mountains. Since then, I’ve been intrigued by the prospect that someone or something else “is out there.” 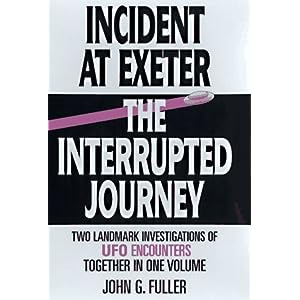 National Public Radio’s website has a fascinating report on a new book about the mysterious “Area 51” government research site in Nevada. The author, Annie Jacobson, offers her take on what really went on and continues to go on at this super-secret site out west. Toward the end of the book she reports on a startling version of the story of the “flying disc crash” in New Mexico in 1947, a subject that has fueled many cable TV programs over the years. Read the NPR report here, and support your local station if you value the source.

4 Responses to This Is Interesting: Area 51 Decoded