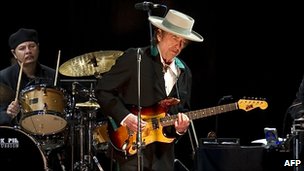 bbc.co.uk today reports that Bob Dylan via his website has responded to critics who claim he submitted to Chinese political censors’ demands and sent authorities the list of songs he planned to play on a recent visit there. Dylan stated that he played everything he “intended” to play and gives the background on the set lists provided before the performance. He also mentioned that his concert was framed in the Chinese media as a performance by one of the rebellious figures of the 1960s, including Jack Kerouac. Read the complete article here.

“The Chinese press did tout me as a sixties icon, however, and posted my picture all over the place with Joan Baez, Che Guevara, Jack Kerouac and Allen Ginsberg,” he wrote on his website.

“The concert attendees probably wouldn’t have known about any of those people.

“Regardless, they responded enthusiastically to the songs on my last 4 or 5 records. Ask anyone who was there. They were young and my feeling was that they wouldn’t have known my early songs anyway.”

By the way, Dylan played his first concert in Vietnam today on the other side of the date line. Read the report on bbc.co.uk here. The concert at a university drew 8,000 people.

“Bob Dylan’s music opened up a path where music was used as a weapon to oppose the war in Vietnam and fight injustice and racism,” Tran Long An, 67, vice-president of the Vietnam Composers’ Association told AP.

And here’s an advance Happy Birthday! to Bob Dylan, who will turn 70 on May 24.

Final note: In a recent Rolling Stone magazine poll of “musicians, writers, and academics,” Dylan’s song “Like a Rolling Stone” was ranked the best and most important song he has composed and recorded.