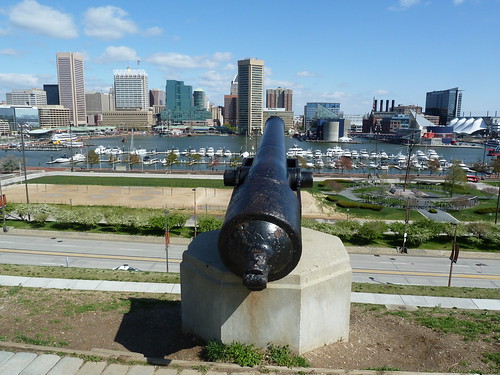 Less than a month after the Lowell-based Sixth Massachusetts Volunteer Infantry Regiment had to fight its way through a pro-secessionist mob in Baltimore to make it through to Washington, Ben Butler acted decisively and on his own initiative to wrest that key city away from the rebel sympathizers, putting it squarely under the control of the Union Army. On a very rainy May 13, 1861, Butler loaded the Sixth Regiment and part of the Eighth New York plus a couple of cannon onto a train in Washington and quietly rolled northward until the train eased into Camden Station. Rather than go to the north of the inner harbor to the site of the most important government buildings (and also the site of the April 18th riot), Butler led his men around the southern edge of the harbor to high ground that overlooked the city from across the harbor. With the driving rain keeping so many inside, Butler and the Lowell soldiers were able to ascend Federal Hill (shown above) and hastily construct a fort atop it. When the city awoke the next morning, the sight of a mammoth US flag flying over the hill was stunning as was the dug in cannon pointed at the heart of Baltimore. The pro-secessionist forces quickly crumbled and Butler made full use of the President’s suspension of the right to obtain a Writ of Habeas Corpus to arrest all pro-southern government officials, imprisoning them in nearby Fort McHenry.

On May 13, 1861, Butler acted without orders. His initiative served the Union well in this situation, for Baltimore was never again a problem for the Union supply line.