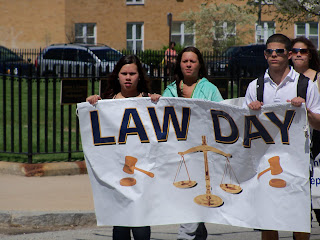 Growing up in the 1960s and 70s, I always watched the network news on May 1 because that’s the day that the Soviet Union would parade its most advanced military equipment through Red Square as part of that country’s May Day celebration. To contrast the Soviet glorification of military power, President Dwight Eisenhower back in 1958 proclaimed May 1st to be Law Day, a day on which Americans would celebrate the supremacy of the law.

With May 1 falling on a Sunday this year, the annual commemoration of Law Day by the Greater Lowell Bar Association was held at Middlesex Superior Court this past Friday. The event featured a student essay contest, patriotic songs, and speeches from judges and elected officials. A full report is available on the Lowell Deeds blog.

I found it especially appropriate that the greatest mass murderer in American history, Osama bin Laden, was brought to justice on May 1 – on Law Day. It’s fortunate that he was killed in the raid on his compound. Had he been captured, he would have been entitled to some kind of due process, a military tribunal no doubt, and would have been afforded legal counsel. But like the architects of the Third Reich at the post-World War Two trials in Nurnberg, bin Laden, too would have been brought to justice. His death makes the outcome clearer – – – and gives us another reason to celebrate May 1.