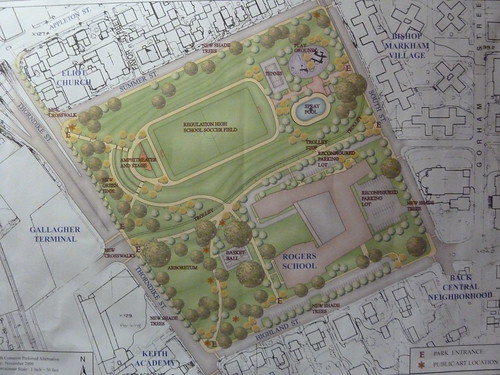 The City of Lowell’s Department of Planning and Development hosted a public meeting last night at the Pollard Memorial Library meeting room to update residents on plans to renovate the city’s South Common. DPD’s Rachel Kisker facilitated the meeting and landscape architect Nina Brown (whose first project in Lowell was designing Boarding House Park) did the presentation.

The plan is to have the construction documents complete by June 30 of this year. That would allow the city to apply for a state grant of $1.5 million that, if awarded, would allow construction to begin in the spring of 2012. Since the overall improvements contemplated would cost $7 million, the work will be split into phases.

Phase I will include an extension of last summer’s renovations to the sidewalk and lighting along Thorndike Street all the way to Highland Street. It would also include the installation of a path all the way from Thorndike to South Street with appropriate lighting and the replacement of the existing 8-foot high razor wire topped chain linked fence behind the Rogers School with a more sightly barrier. This path would be laid out to accommodate the contemplated extension of the National Park’s trolley system through the Common.

The trolley now ends on Dutton Street opposite the Textile History Museum. The line is expected to be extended into the Hamilton Canal development areal. Once that’s done, it could then be extended again up South Street – crossing Appleton – to the South Street-side of the South Common. From their, the trolley would turn into and cut across the Common and Thorndike Street to drop riders right at the Gallagher Terminal.

Phase II of the project would be the renovation of the existing soccer field. This would include a walking track around the field’s perimeter and an amphitheater built into the slope along Thorndike Street across from the Gallagher Terminal with the stage area on the Thorndike Street side of the playing field. There is an ongoing investigation as to what surface – natural grass or artificial turf – would be best for the soccer field.

Phase III wold include all of the “activities” such as a new playground along South Street and a new pool, either of a traditional variety or a fountain pool. The idea is to keep all the family-friendly activities grouped together in that area so that a parent would be able to supervise multiple children at the same time. There is also much consideration being given to keeping noise down at night because of the housing across South Street. Because of this, a basketball court will be located in the opposite corner of the park, closer to the Thorndike-South Street intersection (although this park will not have lights to keep it from being used late in the evening).

I found this meeting to be very interesting and informative. So much of this work is money-dependent that given the present tough fiscal times, it might take longer to accomplish that we all hope. Still, you can do nothing without a good plan and it seems the city already has that.