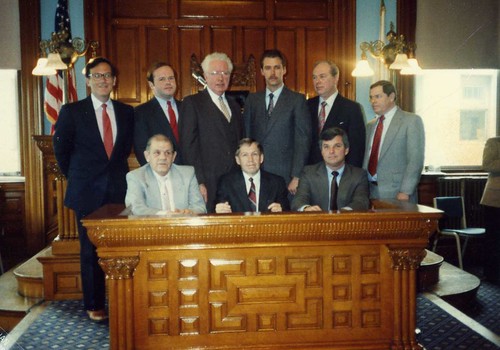 Congratulations and thank you to Bud Caulfield for his long and dedicated tenure on the Lowell City Council. Caulfield announced today that he would not seek reelection to what would be his thirteenth two-year term on the council.

While the reasons for such a major change in the city council are always complex, the following excerpts give a sense of what was going on in the city at the time:

In the [past] nine months . . . Lowell has again been transformed, this time from a prosperous renaissance city to a divided community shaken by rumors, recriminations, and resignations — much of them fostered by widely reported federal and Middlesex County investigations probing political corruption and organized crime in the city.
“First boom, then bust? ” by Mark Jurkowitz, Boston Phoenix, February 24, 1987

The campaign, which begins in earnest this weekend, is the first in many years with negative overtones, and the Oct 6 preliminary election may begin a new era in Lowell politics . . . The council campaign comes on the heels of major federal and county investigations, the departure of Joseph Tully as city manager and a general air of tension among elected officials.
The Column, Lowell Sunday Sun, Sept 6, 1987

Bud always ran strong, finishing third in 1989, second in 1991, seventh in 1993 (an election that saw six new councilors and only three incumbents reelected), and second in 1995. It was in that year, that Bud was elected major, the first of two times he held that office.

Lowell’s new mayor, Edward Charles “Bud” Caulfield, 57, proves that despite the legendary rough-and-tumble image of Mill City politics, there is always room for a nice guy. . . For Caulfield, recognized mainly as a “streets and sidewalks” kind of councilor, becoming mayor Tuesday was a crowning achievement that he coveted but did not dare anticipate. “Somebody had better pinch me,” Caulfield, half-joking, said as he accepted the handshakes of well-wishers in the mayor’s reception room at City Hall after the vote.
Lowell Sun, January 7, 1996