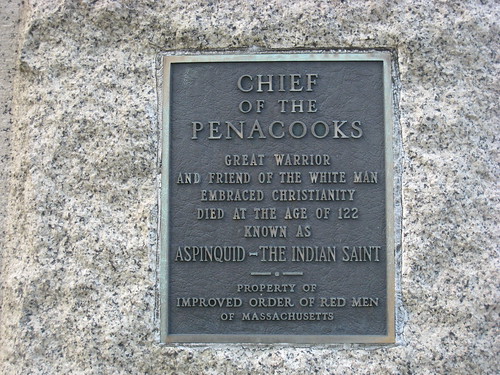 In all of our talk about relocating the Passaconaway statue from Edson Cemetery to Pawtucket Falls, we skipped over the issue of ownership. The plaque on the statue, shown above, says that it’s the property of the “Improved order of Red Men of Massachusetts“, a group that Eileen L points out is still in existence. In case you choose not to follow the preceding link, understand that the IORM (as they are known) are not Native Americans or related to Native Americans. Instead, it’s a fraternal organization that began in pre-Revolutionary times. They count as their accomplishments supplying the “Indians” who tossed tea into Boston Harbor in 1773. Here’s part of what the group’s website has to say:

The fraternity traces its origins back to 1765 and is descended from the Sons of Liberty. These patriots concealed their identities and worked “underground” to help establish freedom and liberty in the early Colonies. They patterned themselves after the great Iroquois Confederacy and its democratic governing body. Their system, with elected representatives to govern tribal councils, had been in existence for several centuries.

After the War of 1812 the name was changed to the Society of Red Men and in 1834 to the Improved Order of Red Men. They kept the customs and terminology of Native Americans as a basic part of the fraternity. Some of the words and terms may sound strange, but they soon become a familiar part of the language for every member. The Improved Order of Red Men (IORM) is similar in many ways to other major fraternal organizations in the United States.

4 Responses to “Improved order of Red Men of Massachusetts”