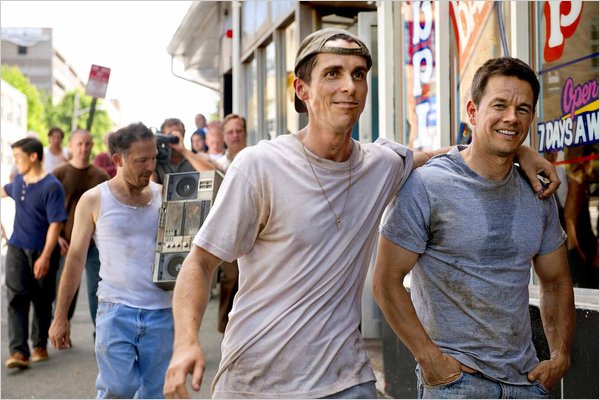 Christian Bale, left, and Mark Wahlberg play brothers who are boxers in “The Fighter.” (Jojo Whilden/Paramount Pictures, via Associated Press)

This morning Dick Howe noted for his FaceBook friends that for a recent edition of the New York Times – A. O. Scott has written an essay on class consciousness as reflected in today’s films – and features “The Fighter” and Lowell, Massachusetts.

“The idea of the universal middle class is a pervasive expression of American egalitarianism — and perhaps the only one left.”

Scott goes on to to discuss class warfare and antagonisms today as seen in the current crop of movies – many contenders for top film awards and honors. Here he refers to the local movie biopic based on Lowell’s Micky Ward “The Fighter” and the movie based on the Harvard grad Facebook founder Marc Zuckerburg “The Social Network”:

Or, to put it another way: Class is everywhere and nowhere. The feeling of class antagonism is what allows the Mark Zuckerberg of “The Social Network,” a child of suburban prosperity, a graduate of Phillips Exeter Academy and a student at Harvard, to feel that he is excluded from the highest reaches of social distinction, an underdog with something to prove. That same feeling percolates in Micky Ward’s Lowell, a few years and an hour’s drive from Zuckerberg’s Cambridge but a different world altogether. There Micky’s girlfriend, Charlene, is regarded by his sisters as superior and stuck-up — a virtual Berglund, even though what they call her is an “MTV skank” — because she briefly went to college and believes that Micky can rise above his hardscrabble circumstances. Micky — like Ree Dolly, the Missouri teenager in “Winter’s Bone” — wants out, just as surely as Zuckerberg wants in. What they want into and out of are the closed systems defined by custom and kinship that demarcate the ends of the social spectrum.

For you denizens of Lowell and the environs – as you wait for the full brunt of the expected northeast blizzard –  do you recognize the “on location in Lowell” site of the movie “still” pictured above? Share!

2 Responses to Class Warfare in the Movies – the Lowell Connection