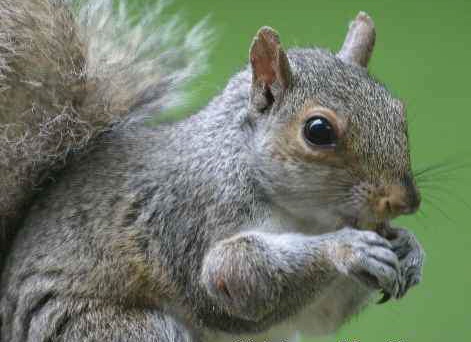 Steve O’Connor contemplates the furry gray creatures who provide us with constant companionship – at a safe distance.

Anyone who has ever lived in Lowell must at some point have stopped to observe and to consider that wily and well-adapted creature which could well be the city’s mascot: the gray squirrel. It may be an oxymoron, but the squirrel is a cute rodent, with his bushy tail curled above his head, nibbling a delectable acorn held in what appear to be tiny hands. Leaping from branch to branch with an agility that any trapeze artist might envy, digging up the lawn to find the nut that was buried there months ago, pursuing females of his species spirally up and down the oak tree, or maybe just playing,—sitting on a bough cackling at the cat below—these are all images familiar to Lowellians.

Squirrels are a mystery to me. For example, there must be hundreds of them who inhabit the oak and maple trees in and around Tyler Park. They have been there all my life. Yet the life span of a squirrel is (here the writer pauses to do a google search), approximately six years. In my nearly five decades of observing squirrels, I’ve only seen about three or four dead ones, and they appeared to have been hit by cars. Think of all the generations of squirrels that have passed through these trees, thousands and thousands of squirrels. Where are all the dead squirrels? Where do they go? Another mystery-it’s ten degrees out as I write this; soon a curtain of icicles will hang in front of my window. How are they able to survive in a pile of leaves tucked in the crotch of a windswept tree? All creatures need water to survive. Where do they get water when everything is frozen solid? What do they use to wash down the frozen acorns?

I hope that squirrels are extremely intelligent, because they have outsmarted me on several occasions. Most of us begin to lose that warm and fuzzy feeling for these bushy tailed rodents soon after hanging up a bird feeder. If you have a bird feeder, the squirrel is public enemy number one. I have tried greasing the pole on which the feeder is located, hanging the feeder from an exceedingly long rope; I’ve used foils and baffles that never baffled my bushy brethren. My terrier has spent a life madly chasing them, but he’s an old dog now, and he’s never caught a single one.

They’re clever. They’re tough. They’re survivors. They’re a lot of fun to watch. They’re pretty much like the people who live beside them in this old city.

4 Responses to “Thoughts on Squirrels” by Steve O’Connor