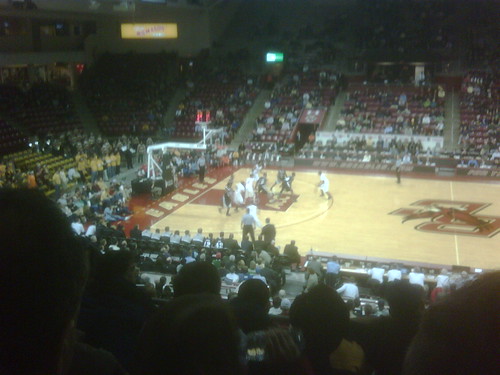 I traveled to Conte Forum on the campus of Boston College last night to watch the Boston College Eagles play the Providence College Friars in basketball (me – Providence, class of 1980). The first half was a BC blowout with the Eagles up by as many as 20, ending the half with a 15 point lead. Providence picked up the pace (and the speed) of its defense in the second half, however, and clawed its way back into the game. With five minutes left, PC was down by 5 points; with three minutes to go, the BC lead was down to 3 points. With just 30 seconds to go, BC clung to an 85-83 lead. BC nailed a 2 pointer to go up by four, 87-83 with just a few seconds left, but then Providence nailed a 3 pointer with 2.8 seconds on the clock, closing the BC lead to just a single point (87-86). Providence fouled on the in-bounds pass and a BC player went to the line with two foul shots and just 1.7 seconds left. He hit the first (88-86) but missed the second. A Providence player rebounded, dribbled twice, and heaved a two-handed, chest pass type shot towards the other basket as the buzzer sounded. The ball ricocheted off the backboard, caught the front of the rim and bounced away, preserving the win for BC – but just barely.

With it being a cold, midweek night, there wasn’t much of a crowd for this game, but I did spot several folks from Lowell, especially when PC mounted its comeback and all the Friar fans were on their feet.

One Response to Boston College 88, Providence 86