After the Senate takes up tax and spending issues, Senator Scott Brown now says he will vote to repeal the military’s don’t ask, don’t tell policy, which effectively bars gays from serving. The change of heart comes in the wake of a Pentagon review that predicted minimal problems if the change is made. Brown is now aligned with a significant majority from all walks of life, not just in Massachusetts but around the country.

A Washington Post poll showed that 75 percent of all Americans support repeal, including majority support among conservatives, Republicans and seniors, traditionally opposed to repeal. Even a majority of those on active duty say gays serving in the military would not negatively affect those serving. (The Marine Corps were least supportive.)

Retired General Wesley Clark, former NATO Supreme Allied Commander, said on This Week Sunday morning that now is the best time for change because the focus is on war. When Americans are in combat, they pull together because they are Americans, according to Clark

Admiral Mike Mullen, Chairman of the Joint Chiefs of Staff, has testified before Congress that don’t ask, don’t tell forces people to lie, and “that’s not who we are.” 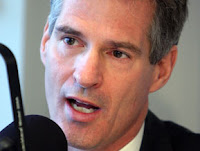 “I have visited our injured troops at Walter Reed and have attended funerals of our fallen heroes,’’ he said in a statement. “When a soldier answers the call to serve, and risks life or limb, it has never mattered to me whether they are gay or straight. My only concern has been whether their service and sacrifice is with pride and honor.’’

A gratifying aspect of the Senator’s statement is that he had pledged to keep an open mind and kept his pledge. Not so Senator John McCain who, as a Boston Globe editorial points out, remains obdurate on this issue.
If Scott Brown continues to behave in this reasonable way on other issues, not voting in anyone’s pocket, he could take the next step toward fulfilling his image of himself as an authentic change agent.

Please let me know your thoughts in the comments section below.