Prompted by Dick’s post about the Johnny Depp interview in Vanity Fair magazine, I’ll share this account of his visit in 1991. I spent the better part of a day and evening with him and John Sampas. I waited a long time before publishing anything about the experience because I was looking for a way to write about it without sounding like a celebrity chaser or betraying any confidences. About ten years later, I read a poem by former US Poet Laureate Ted Kooser about a visit by Russian poet Yevgeny Yevtushenko to the University of Nebraska in the 1960s. Kooser was with the guest poet and later wrote about the visit in a poem addressed to Yevtushenko. When I read the poem, I found a way to write about Johnny Depp in Lowell, a prose poem in my case. The poem is included in my book “What Is the City?” —PM

Johnny and the Raincoat

You were a serious young guy wearing a gray-green plaid shirt over a tan t-shirt, brown pants with cuffs rolled, combat boots, and an Atlanta Falcons cap turned backwards. You set your black attaché case at your feet and sat down at the all-purpose dining room table. You had a cigarette behind one ear. Your voice was deep, and your lingo street. I watched Edward Scissorhands hold by an edge a photo of Kerouac shoveling snow on Sanders Avenue in 1967, another of Jack petting a black cat. You studied typed letters to Neal and Sebastian, flipped through the uncut, illuminated Book of Dreams typescript with its title page collaged with blocky words and lingerie models clipped from newspapers. You came to Lowell to buy Jack’s raincoat—a plain, dark wrap with a used tissue in the left pocket.

The week before you had been in New York to shoot final scenes for a film with Faye Dunaway and Marlon Brando. You were engaged to Winona Ryder. I liked your polite, easy manner. After you arrived mid-afternoon, we examined documents and talked K for hours. “I can’t believe I’m in Lowell. This is like touching the robes of Christ,” you said. We toasted the author with cognac while an acetate Jack scatted and read passages from Vanity of Duluoz. Upstairs you looked through boxes filled with socks, cancelled checks from 1958 to 1968, a Horace Mann yearbook, rolled Japanese calendars from a publisher in Tokyo, a beat-up address book, Zig-Zag papers, ancient hard candy.

After dark, we drove in the executor’s vintage Mercedes to a bistro downtown, a makeover of one of Kerouac’s hideouts. On the wall hung framed snapshots of a scruffy Jack with a drink, circa the Summer of Love. You talked about growing up in Kentucky and Florida. You said you didn’t consider yourself a proven box office star, said your latest work was an art film. “The paparazzi are horrible. People steal my mail. Hollywood is a small town.”  You signed a menu for the owner. At ten o’clock we dropped you off at your purring limo and promised to write. 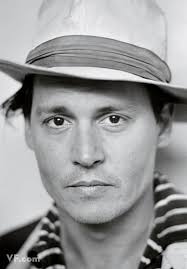