Nationally, angry voters pulled the lever for change, but here in Massachusetts a majority cast their ballots for optimism. Winners and losers weren’t defined just by the metrics however. Scott Brown, while not on the ballot, lost some sheen because Massachusetts voters turned their backs on candidates who, like Sean Bielat and Jeff Perry, claimed to be riding the wave that had swept Brown into office in January. The anti-incumbent tsunami anticipated in Massachusetts was greatly overestimated.

Brown lost again, along with Mitt Romney, for wrapping his arms around Perry, tainted by the then-police sergeant’s connection years ago to an illegal strip search of a teenage girl. The Boston Herald lost when its major office endorsees went down, as did the full panoply of newspapers statewide who backed Mary Connaughton for auditor, an endorsement that should have had clout in a low-visibility race .

In losing, 4th District Republican Bielat can hold his head high. He made Barney Frank work very hard and spent lots of money for a much narrower margin of victory that he is used to. Bielat comes out of the campaign with the foundation for an organization that may be successful next time, if not for Congress then for some other office. (Remember Joe Malone’s success after losing to Ted Kennedy in the eighties?)

In his victory speech last night, Frank was characteristically ungracious, typically irascible and factually correct. The election’s over. No more Mr. Nice Guy. He’ll need that tough-mindedness when he returns to the House, having to fight to defend gains made last term in a more hospitable environment.
With the House turning Republican Frank and other members of the Massachusetts delegation, including Congressman Ed Markey will lose their committee and subcommittee chairmanships. The MA State House is the local GOP’s silver lining. Republicans doubled their numbers, and, while far from reaching critical mass, will have an opportunity to begin rebuilding a two-party system….sort of.

Governor Patrick won convincingly, what Joan Vennochi calls “A Massachusetts Miracle,” but lost over $100 million with the peel-back of the sales tax on alcohol. Add that to the $2 billion estimated deficit he’ll have to deal with the next fiscal year, and he may wake up with a voice in his ear chanting, “Be careful what you wish for.”
Charlie Baker lost his “fair-haired boy,” wunderkind image not just in losing but in never living up to his long-anticipated promise as a candidate. That said, he added immeasurably to the policy debate and raised some solid ideas (notably many of his “Baker’s Dozen.”) All of us will win if he stays engaged in the civic process. 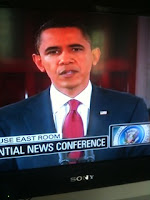 Obviously, President Obama lost in losing the House and in seeing so many state offices go red. In today’s press conference, he called it “a shellacking,” But if he doesn’t act nimbly the worst could be ahead. In holding on to the Senate, he will lose the Harry Truman opportunity to run cleanly against a do nothing Congress.
The final tally of winners and losers won’t really be known until the overwhelmingly red state legislatures, reinforced by the sea of red in governors’ offices across the country, draw the lines redistricting the House based on new census numbers. The consequences of November 2, 2010 will be felt for a long time to come.
Please let me know your thoughts in the comments section below.

2 Responses to Feeling blue while seeing red? Thoughts on other winners and losers by Marjorie Arons-Barron