Much has been made about several head-to-head blows delivered by defenders in the NFL two weeks ago. Some of the offenders were heavily fined for their actions and the league quickly announced it would suspend any player who hit a “defenseless player” in the head. After last week, the NFL hierarchy was congratulating itself because defensive players were collectively “lowering their aiming point” and hitting opponents lower in the body and thereby sparing them, in theory at least, from devastating head injuries.

All this attention to highlight-reel hits, however, may be detracting attention from a bigger problem for the NFL and football in general. That problem is the long-term impact on the brain of repeated blows to the head of varying severity. Years ago while still practicing law, I attended a seminar on head injuries. The subject was fascinating to me which may be why the content has stuck with me for so long. (The head injuries covered at this seminar were the type incurred in motor vehicle collisions but the physics and physiology are the same).

The human brain is suspended in liquid within the hard shell of the skull. When a blow lands to the head or when the head strikes something, there is the damage from that initial impact, but there’s also secondary damage as the brain slams into the inside of the skull in response to the initial blow. Imagine a passenger in an automobile who is not wearing a seatbelt. In a head-on collision, that occupant becomes a projectile that is thrust into the dashboard as he continues moving forward after the car has abruptly stopped because of the crash. It’s that secondary impact that causes the injury.

And so when it comes to “protecting” the head in football (or hockey or boxing or soccer or in any other sport that involves blows to the head), I don’t understand how a helmet can make much difference to what is happening inside the skull. As this story and the graphic below demonstrate, today’s football helmets are designed to prevent skull fractures, not concussions. Nothing in a helmet will immobilize the free-floating brain and so with every blow to the head, you’ll always have that secondary blow to the brain from the inside of the skull. Unfortunately for the future of football, I suspect that ongoing studies will eventually conclude that even blows that do not rise to the force needed to cause a concussion will have a harmful impact on the brain. It’s a topic that deserves our attention and we should not be sidetracked by the NFL’s recent emphasis on penalizing highlight-reel hits while the league ignores the more insidious threat to its players and all the young people who also play the game. 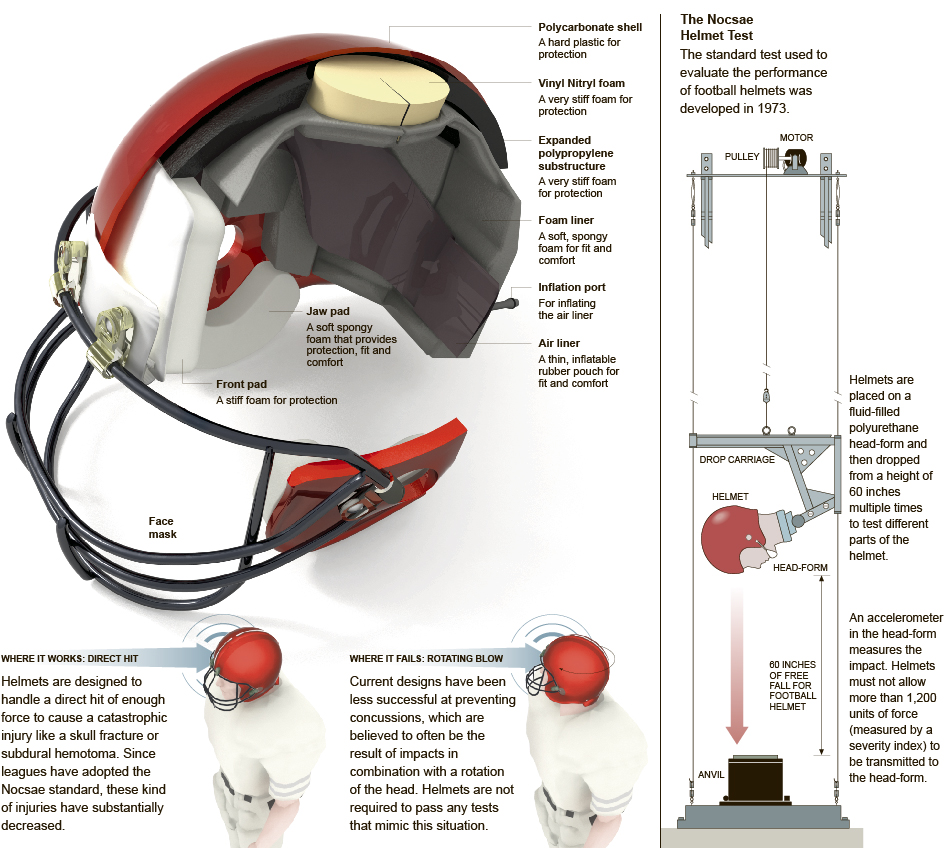