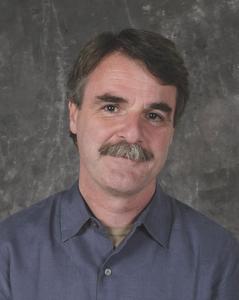 Renowned author and illustrator David Macaulay may be a distinguished winner of a MacArthur Foundation “genius grant” Fellowship and the Caldecott Medal for children’s literature, but today he came across more like an inspiring junior high-school teacher (he did that for one year) rather than some artist-god who came down from the mountain to talk to us. Nearly 200 students, faculty, and staff from UMass Lowell along with dozens of guests from the community filled the O’Leary Library auditorium on the South Campus to listen to Macaulay talk about his creative process and look at 70 minutes of astonishing drawings projected on the 16 x 8 foot screen. More than half the audience appeared to be art students, judging from all the portfolios, paint boxes, and other paraphernalia they carried in. The Art Department faculty and colleagues from Cultural Studies, Computer Science, English, Physical Therapy and other departments were out in force. Prof. Jehanne-Marie Gavarini of the Art Dept. introduced the guest speaker.

Macaulay said he does what he does for a living because he is so excited about learning. Each new project, new book, offers an opportunity to dig deeply into a subject that he is curious about. He showed lots of rough sketches to demonstrate how his ideas evolve. He said, Don’t worry if you don’t know where you are going when you start a drawing or painting or story or music composition. The fun is in the discovery and problem-solving.

He spends a lot of time in schools all over the country, and is discouraged by what he sees. School should be about learning to learn, he said, agreeing with an audience member. He said if the system of teaching people a standard curriculum and training them how to take tests to prove they have retained the information is so successful, then why is the world we live in so messed up? Doing it the way we’ve been doing it in classrooms isn’t working, in his view. He said adults in the education field tell him various versions of this: We should just shut the whole operation down for two years and start over from scratch.

Macaulay is a living example of what philosopher Joseph Campbell talked about when he said, “Follow your bliss.” After choosing architecture as a course of study at Rhode Island School of Design, Macaulay eventually admitted to himself that he didn’t want to be an architect. He loved to draw, but didn’t think being an illustrator was something he could do to earn a living. He had the courage to try, and set out to follow his passion, starting out doing illustrations for calendars and newspaper ads. He moved on to try his hand at children’s books, which he says is a counterintuitive outcome because he didn’t want anything to do with books when he was a kid. He wanted to go outside and build things. Books were not an attraction. Skip ahead 30 or 40 years, and he is one of the best-known authors in the country. Someone asked him what he is working on now. He said two projects—a book about inventions that led to other inventions and a second book about evolution. He said he has a few friends in Oklahoma and Kansas he wants to send the evolution book to when it is published.

When I spoke to him briefly before his presentation, he was full of praise for the way Lowell has developed in recent years. He had not been in the city since he came here to research his book “Mill.” He said the buildings on Merrimack Street are beautiful, and the downtown is vibrant and busy compared to many other older mill cities in the region.